Where did the last two weeks go?

I won't bore you by telling you, but we have been a little busy.

'Visual Marks' was all about drawing. We all brought items which, for us, symbolised 'connections', which were used to assemble a still life. We then drew it from different positions. Now, as you may have gathered, I am not a confident drawer, and it took me quite a while to settle in to this exercise, so my efforts will not receive widespread publicity. However, inspired by some of the things our chair, E had done with the previous session's group graffiti, I did play around with them in a couple of apps. 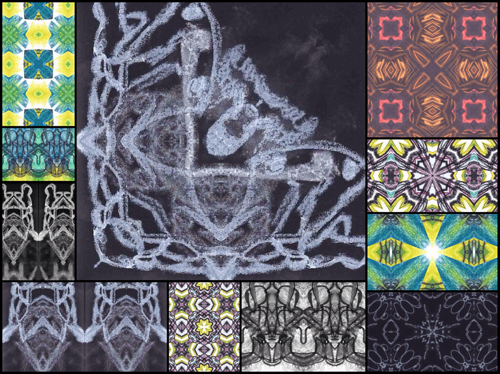 These were produced using Mirrorgram, Flipomatic and Kaleidoscope apps for the iPad. (It was Mirrogram which produced all the helmeted warriors!) I learned that the effects work best if you zoom in to very small details. 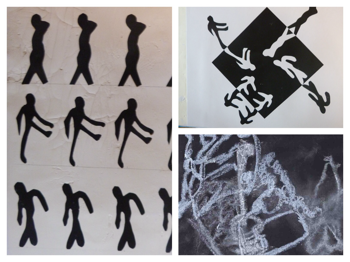 I also tried the low tech approach of using tracing paper and picking out interesting shapes from two blind contour drawings, one in chalk, one in oil pastel, on top of each other.

I'm not sure how these will develop into stitch, if at all, as I have ideas for a couple of the drawings I did direct onto cloth, and which have been ripped up to be reassembled in a new improved format. Maybe.

You have no workshops for a while and then two come along at once. Last  Friday was Contemporary Textile Workshop day. We took in images of 'landmarks' - in my case, photos of organic and inorganic things on the ground, like twigs, leaves, puddles and gratings - which we used to inspire hand made stamps. 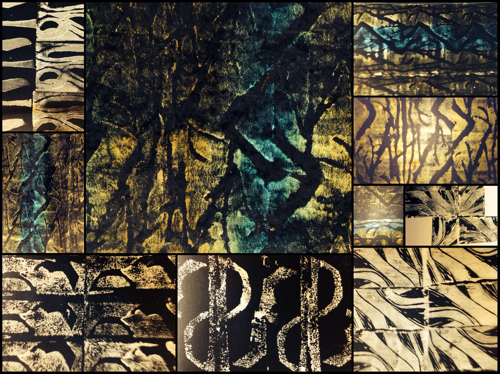 Like these - a mixture of eraser and fun foam stamps, plus a new idea I found here. I modified the idea slightly, because I forgot the suggestion to use a paint roller to hold the pipe insulation, until now... 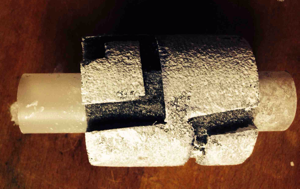 I made a miniature rolling pin by inserting a smaller tube into the pipe lagging - in this case, the inner tube from some ready rolled icing. (Or it may have been marzipan - in either case, I knew it would come in useful one day.) The inner tube was slightly too small, but wrapping it in duck tape solved that problem.

I used a Fiskars craft knife to slice and dig the foam out - the sharper the better! And as my friend A. suggested, instead of cutting away, you could apply or wrap things on the surface of the foam, like string, lace, rubber bands, self adhesive fun foam etc.

The gold and turquoise sections above were done at home, printing on to black fabric, including stretch velvet. My current plan is to make a bag with it, once I've finished the plant images for VM - three down, one to go.

This week should be a bit quieter than last, so I hope to have the time and the energy to pick uo a needle!