On organisation: more than you wanted to know. Probably.

I was reading my last ever subscription copy of Quilting Arts a couple of days ago. (It and I seem to be moving in opposite directions these days - one of us likes representational, naturalistic art quilts, and one of us doesn't much. If you feel the same, I recommend 'Fiber Art Now' which is much more wide ranging and goes from strength to strength.)

But I digress. When I first glanced at QA, I found one interesting article - on Melinda Lin's organza pieces - but then I realised that Lynn Krawzyck's item, which is superficially about making a little pouch, contains some good suggestions about organisation. She distinguishes between two types of creative ideas, which she calls 'Fun' and 'Big Goals': she says fun ideas are necessary to stretch our creativity, but big goals are the more involved, artistically important, and goal oriented ideas. She gives criteria for picking your big goals, and describes how she uses index cards to break down big goals into smaller steps, and prioritise organise, and monitor the steps.

For some reason I can't remember, I have a lot of small pink index cards (plus a few blue ones). I had been thinking of using them for ICAD, but they are really too small and too pink. Krawzyck's idea seemed a better use, especially as I will need to be more focussed when I become a university student again. 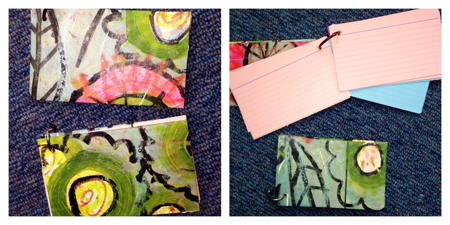 Krawzyck uses pouches to hold her cards, but I remembered seeing an index card 'book' - you can guess the rest. Some scrap card, a recycled painting, Bondaweb, double sided tape, some elastic and two book rings, and I have two books. The worst bit was punching the holes, and I was very relieved when I realised I didn't have to do them all at once.

While I was making the books I was pondering on my love of organisational techniques - nicking adapting other people's, and developing my own. And now, for my benefit (clarifying my ideas) more than yours, you are going to suffer a diatribe on the subject, so you may wish to switch off now, or at least scroll down to this week's obligatory textile content.*

I am not always organised, but I can be if I need to be. I had to be at work - young people's progress, and part of the college's finances depended on it. I was reliant on other people keeping good records, so I had to develop systems that were simple for others to use, and which allowed me, and others, to extract the relevant information easily. Other people, including auditors, told me I succeeded.

One of the things I learned at work was that if something isn't staring them in the face, preferably leaping out and biting them, people will miss it. (Like the auditor who told me that a student's assessment record was missing, when the top piece of paper in the file was headed 'Assessment Record'. It wasn't the type we usually used, so he missed it.)

When I started the Foundation Degree, on a couple of occasions I lost marks because the marker thought I hadn't done something when I had. I got all bureaucratic and made some forms, to record things like time management and planning. I don't suppose anyone ever read them through, but they were bright green, clearly labelled and collated, so they were hard to miss, and my marks improved. Plus I knew where I was with my work, and what I needed to do to keep to schedule.

Of course once I finished the FDA I stopped all that, but I still keep records - of ideas, of what I've done, what I could do, and what I want to do, of materials and techniques I've used, etc. etc. etc. For a long time this was mostly scribbled notes in sketchbooks, printouts in folders, and lists on scrappy bits of paper, but it just wasn't organised enough for me. So over the last year or so, long before I thought of going back to Uni, I've begun to try to sort it out.

A few months ago I discovered Bullet Journalling. I don't use it to the extent that its creator seems to - although I might if I was still working. Nor do I use the recommended Moleskin notebooks with squared paper - I did track some down in Paperchase but jibbed at the price. Guess what, I make my own with squared file paper. (The squared paper really is better, I've tried lined and it's not as good.)

I use the technique in a monthly journal, where I summarise what I've done and what I want to do, in real and textile lives. I use it in two disposable notebooks, substitutes for the scrappy bits of paper. I have one upstairs and one downstairs. In those I record ideas from books, and flashes of inspiration (!). And I also use the technique in themed sketchbooks, where I collate relevant ideas from the notebooks at the back of the sketchbook. Notes on the techniques and materials I've used also go in the sketchbook, on the relevant pages.

The system does involve quite a lot of rewriting, when I transfer uncompleted activities from one month to another, or from the notebooks to the sketchbook, but I like that because it makes me evaluate the ideas or activities and weed out the dross.

I've recently discovered 'Sticky', an iDevice app which sticks virtual Post-It notes in virtual notebooks. I like it because I can make notes when I'm web surfing, when I have my phone, but not my upstairs/downstairs notebooks. I can add hyperlinks, websites, or photos from the Camera Roll, and, I realised this week, I can use the camera phone within the app to add photos direct. I can save notebooks as images, which means I can print them and add them to the sketch book.. I like it so much I paid for an upgrade to allow unlimited notebooks.

I realised that I had folders and scrapbooks full of printouts and images, which I never looked at. Now I save articles to Pocket (where I do occasionally look at them) and images into a digital journal on the desktop (where I don't look at them).

But the gap in this system, which I was unaware of until I came across Lynn Krawcyck's article, was that I didn't have a system for planning and monitoring Works In Progress. Possibly because since I finished the FDA I haven't really had any serious WIPs to plan and monitor.  I do make To Do lists, far too long and on scrappy bits of paper that get lost. (The aforementioned green forms had a space for a To Do list, never longer than three items and carefully monitored.) As I see major WIPs in my future, I also see a need for a structured system for their planning. I have no idea if task management will be on the marking criteria at Uni - I rather suspect not - but, as I think I have made clear, I like having structured organisational methods - plus an excuse reason to make books...

Don't be fooled into thinking that I am one of those people who is completely organised, and lives in a neat and tidy house. I am not. Neither my house nor my workroom is tidy. I have too much stuff in too small a space and although I try to keep it under control, in the throes of creation everything comes out and ends up draped and dropped everywhere. It does get put back again when I've finished - and the next lot comes out. Nor am I so organised that I keep records of what fabrics, yarns and threads I have. That would require a major audit, plus keeping on top of what I import - although recently there has probably been net emigration, rather than immigration, of books and materials from Cheese Acres - a lot has gone to charity shops and the National Needlework Archive at Greenham. I've still got too much though.

If you are still reading, what do you think? Do you share my need for bureaucracy or do you think I'm completely nuts? Do you have any organisational tips to share? 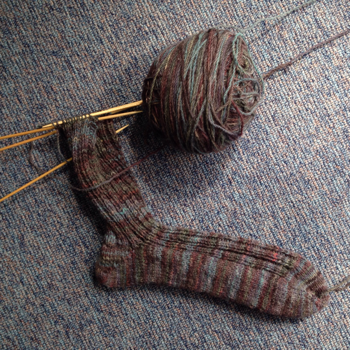 After my last post, I pulled back the too long sock, and started again. It may still look too long, but I have tried it on and it is OK. The ribbing pulls it in, so it looks long and thin, but on my foot it is short and fat. Just like the rest of me, really.

I have just read your post all the way through - I may show the illusion of being organised but I spend way to much time in my head and tend to only get things done (at the last minute) when I sit down and make a plan/timetable. I may be copying some of your ideas....