parts of it were excellent.

The worst bits were, worst to least worst;

1. Getting a (fortunately mild and brief) stomach bug. 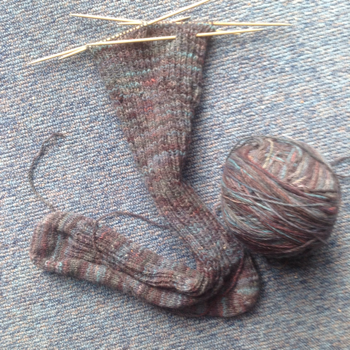 2. This sock - designed to fill out and warm up my recently acquired yellow wellies, but too long in the foot. I think this wool is a bit of my hand dyeing - whoever did it, the dye comes off on my hands. Hope it will be better when washed. 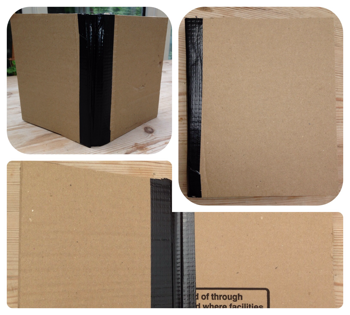 3. The book of the week - a roughly similar design to last week's, but involving duck tape rather than gummed brown paper. Duck tape is very good at sticking to things - fingers, scissors, itself... This, plus the slightly different design and my innate clumsiness, produced a less than satisfactory outcome, somewhat rectified by neatening it drastically with a Stanley knife.

The good, but exhausting, part of the week was extra grandparenting duties. Fun, but hard work. Which meant that my 5 hours a night, insomnia busting, sleep deprivation only happened on a couple of nights. Believe me, I have not been insomniac this week.

The excellent bit was also the scariest. Ever since I finished the Foundation Degree, I've been thinking about trying to convert it into a full honours degree. My fellow FDA graduate, C, mentioned that she had applied to Chichester University to do the third year of their BA in Fine Art. My first reaction was that I couldn't possibly do that, but the more I thought about it, the better idea it seemed.

So, I applied, I had an interview on Tuesday, and I was lucky enough to be offered a place. It's part time, so it will take two years, but won't interfere with the grandparenting. Of course, now I'm torn between excited anticipation and sheer terror... Me, an art student?

To finish off the day, on the way back from Chichester we went into Uppark, (I'm ashamed to say we've never been before) to get some lunch, and discovered there was an exhibition of contemporary art in the house. So we ate sandwiches in the sunshine, then admired the art and the house and came home. Another night when insomnia did not strike!