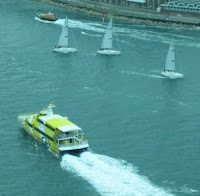 opic on 'Today's title is ..' is 'The Meeting of Opposites'. Nothing leapt into my mind, so I turned to my rather extensive collection of personal photographs. [Not all of them are of Babybel ...]

The first one that caught my eye was this one, taken from the Spinnaker Tower in Portsmouth - but I decided it's a bit predictable. And they are all sailing out of the picture which is bad,bad, bad, designwise.

Then I found this one, taken at Brimham Rocks when we were in Yorkshire last 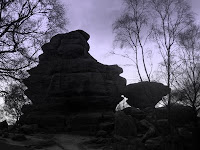 spring - although it doesn't look very spring-like, even before I tweaked it a bit.

Initially I just saw the two rather amusing rocks as the opposites - little and large. Then I realised there are other contrasts - the solidity of the rocks silhouetted against the light sky, and their roundness compared with the feathery trees.

So that's the stones in the title of the post. 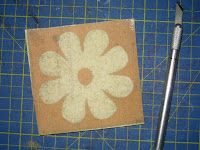 This is today's stamp -another tile. Rather than try to draw it freehand, I cheated and cut out the photo of the tile, and used temporary spray adhesive to stick it to the fun foam before cutting it out with the craft knife. The curved shapes were not easy to cut and if I did it again I think I would probably use scissors and forego the second stamp. 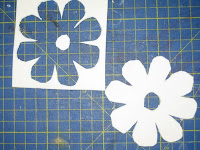 If you remember the sixties, this design may remind you of this or this . Hard to believe such a modern looking design predates them by about 700 years ...

When I made the single star stamp I liked the way the stamp looked and was disappointed in how it came out - perhaps because I used that thick brown paint.
Because this one was such a b****r to cut I wasn't expecting very much from it and was pleasantly surprised by the way it turned out. I might even use this one as a stamp on fabric.
I can also see it as canvas work or layered sheers.

I made a multiple exposure version of of all the images in the collage above - which made me think it would be interesting stamped with Xpandaprint.
If you are not totally turned off stamps by now, do go and look at A's work on Kitty + Stitch. She has had some much more exciting ideas than mine!
And the sealing wax? OK - I lied for literary effect - there is no sealing wax ...


*With apologies to Lewis Carroll. Did you know Alice is buried in Hampshire? Today's useless bit of information, at no extra charge.
Posted by Cda00uk at 17:16