It all seemed so easy …

Let's start with a beautiful peaceful scene. before things get a little more hectic. This week's colour is blue - and here is a beautiful blue sky. Not the Mediterranean, but the English Channel in April last year. Take at Highcliffe in Dorset, one of our favourite places. 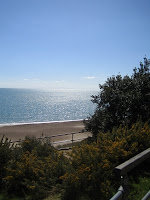 I read a very positive post somewhere – it’s taken such a long time to sort it out I’ve forgotten where – saying that using Microsoft Live made it much easier to write your blog posts than using B*****r.


So I downloaded it.


What the post didn’t tell you is that Microsoft also wants you to have all sorts of stuff I didn't want and/or didn’t understand.


And that it takes a long time to download. especially if you do it twice by mistake.


And that then you can’t find the damn thing.

It does seem to let you do some interesting things, though. Like put rounded corners on your pictures – did you notice that? [Assuming its still there by the time I post this.]


And the preview shows it on your page, not on Blogger's white page.


And the para breaks are automatically double spaced and they seem to stay where you want them!


The rounded corner picture above is of the salt pans with a blanket stitch edging on it – which I like so much that I have decided not to dye it. The problem in the top left hand corner has been corrected since I took the photo. Now I need to think about how I’m going to embroider it. Quilters have it so easy, they would be finished by now.

This is the bleached piece from yesterday – I haven’t got round to trying to discharge the other piece. [Notice the cool reflection?]


I was worried that some of the very fine wax lines wouldn’t resist the bleach, but as you can see they did. I think this may get the C June Barnes treatment – quilting on felt, and shrinking. It is pretty uneven already because I didn’t think to neaten it up before I used it – so a bit of distortion isn’t going to make much difference.


I’ve just spell checked all that lot – Writer’s spell checker is better than Blogger’s as well. Still doesn’t seem to correct ‘i’ though – although I bet it picks up ‘i’ll’. Yup, I was right.


It’s got an ‘undo’ for when you delete pictures by accident like I always do in Blogger, although not a ‘redo’, unfortunately.


Adding pictures seems to be quicker, although that may be because I’m using the laptop which doesn’t have gigs of pictures on it like the other computer. Yet.


Writer puts the picture where the cursor is – not at the top of the page - so if you’ve deleted one by accident, when you replace it you don’t have to persuade it to move down to the bottom of what you’ve written, deranging everything in it‘s wake because Blogger insists on adding all those breaks in your deathless prose that it won’t let you put in normally.


This has turned into a bit of a rant hasn't it?

Thanks for this rant. I'm so glad it's not just me that "loses" photos and finds that all my uploads appear at the top of the page regardless.
Your blog is inspirational. Thank you.