O.K. – hands up – who started singing ‘till her Daddy took the T-bird away’? If you didn’t – commiserations on missing the best era for popular song ever.

This website looks like fun to contribute to. Unfortunately we don’t have any photos of our wedding – chiefly because my uncle took them and never gave them to us – but we do have photos of our parents’ weddings. Maybe some of you fancy making a contribution? then you can join me in saying that you have something in the V&A!

In the last Contemporary Textiles session we

1] splashed wax on paper - and then those who were organised

2] painted the waxed paper with black Quink and

3] ironed it off onto more paper – and then

4] painted the second piece with ink and

5] ironed it off onto more paper and

6] painted that with ink  – you get the picture.

I didn’t get round to this bit in class and I’ve been procrastinating about it ever since. But today I decided it had to be done – and it was fun. After I took the photo above  I experimented with other inks and paints – blue Quink worked, as you might expect, drawing ink was OK but resisted the resist, if you see what I mean – especially the silver ink. And fabric paint didn’t work, even heavily diluted.

The method did work with Quink on fabric but unexpectedly it worked better on thicker fabric – muslin and a very fine poly weren’t very successful.

Another thing i discovered is that you only need a little wax. Otherwise it goes everywhere and you end up with completely waxed paper. 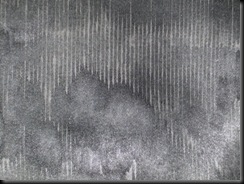 This is black ink on poly satin. I used graph paper for step 3, and found that the grid on the graph paper resisted Quink  – but in lines not in squares.  Looks good, though.

This is step 6 on a silky hand made paper.

And it’s going to count as today’s colour photo – this week’s colour, I’ve just decided, being black. Or white. Or both.

Now I had lots of interesting bits of paper. So what did I do?

Made books of course.  ‘Only’ two so far. And they are very tiny ones …

Don’t ask me why Live Writer has decided to put that in portrait instead of landscape.

The top book is called ‘Waxing and Waning’ and the bottom one is ‘Which Way is Up?’ [The left hand side, as it happens.]

The graph paper didn’t resist the drawing ink like it did the Quink.

In Contemporary Textiles we made marks [holes!] with a nail or a screw punch - but I used some craft punches. Unfortunately my waning moon is only small.

I like punches because you can use both the hole and the paper you punch out. Here are two holes and a punched out bit.

Fun four – or maybe not.

This is what the discharged, Kantha’d on felt  and shrunk piece looke

d like when it came out of the washer.

It came out  darker than before – I suspect the colour in the black felt ran. With hindsight I should have used colour catchers. [How often do I say that? I wish my foresight  was as good as my hindsight.]

Also, it had shrunk quite a lot. I neglected to measure it before I washed it so i don’t know how much but it has lots of texture.

I was a bit disappointed initially but as I've played around with it, it has grown on me. i think it needs a few French knots and beads hidden in the folds, and maybe some linear stitches, and then it will be mounted as a panel. Possibly.

Don’t think I can make a book out of it, though.

should point my mum in the direction of the V&A site. She got married in the 60's and is in a short dress and coat - very fashionable at the time. I was disappointed as a child that she didn't get married in a meringue. I haven't got round to doing the thumping with nails bit but pleased with my wax bits and pieces. Like you found my discharge paste pieces were not successful at all.

p.s. Who sang the original song? Needless to say I have never heard of it.