What I did on my holiday - looong

Once again we went for a week in the Yorkshire Dales. With hindsight it was a mistake to pick Easter week when we didn’t have to, but the journey up was easier than we expected and after lunch the rain cleared and we arrived in beautiful sunshine.

By established tradition [the second time we’ve been] we didn’t do much on Sunday – extended to Monday as it was also a public holiday. As the Dales are popular places at weekends and public holidays, we stayed in the cottage in the mornings and went out for  walks in the afternoons. 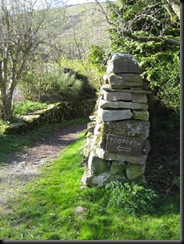 Out of the cottage, across the footbridge over the disappearing river, and walk up the dale – no need to drive and try to find somewhere to park. The weather was beautiful and although there were  some other people about, for most of the time we had the dale to ourselves. 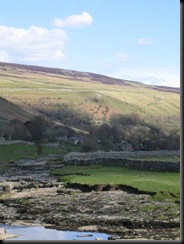 You can just see the end of the row of buildings, where the cottage is, in the centre of the photo. 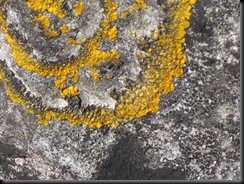 Of course, with all those stone walls, I found some lichen to photograph. 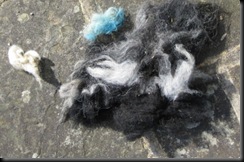 This is a collection I made on the walk.  You will notice a sample from the rare Dales blue sheep. Or it’s raddle. Love that word. 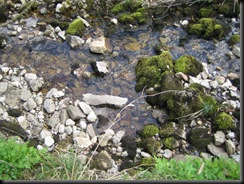 This is the village water supply. It is treated before we drink it , although it looks so clear anyway!

There is no mobile phone service in the dale,  and no wireless network to enable me to post to the blog. Fortunately there is satellite TV – and more to our taste, radio. And we came well supplied with books and, in my case, needlework. Choosing clothes?  – easy.  Jeans, t-shirts, the usual extras.  Choosing books?  - a trawl round a few charity shops produced a week’s reading. Choosing needlework? Bit more of a problem … Which knitting? Last time we came I brought something which didn’t work out, so I had to shop for emergency supplies in Embsay Mill in Skipton. Which embroidery? In the end I chose [shock horror] a printed canvas I bought BC&G when I didn’t design my own stuff. It didn’t come with any thread but I found enough in my stash for most of the colours. Not enough greens though, so I may need to shop for emergency supplies in Embsay Mill in Skipton …

On Tuesday we had a combined shopping and culture trip – starting at Embsay Mill where I got my emergency floss. Unfortunately a few other things just happened to jump into my basket …

Then after a food and petrol shop in Skipton we set off for our culture fix. This was not as straightforward as it might have been. First we got lost in the middle of Skipton and headed off to the north east when we really wanted to go south. [Satnav owners, stop giggling – satnav is quite capable of leading people down a one car wide dead end – which is why we have two ‘No Through Road’ signs at the end of our road. Not that drivers take any notice. If satnav says go down this lane, it must be right!]

But I digress. A bit of old fashioned map reading got us heading towards Keighley. We spotted a likely space to stop for our picnic, and realised we’d left the sandwiches in the cottage. Oh well, there was bound to be a cafe where we were heading.

We drove towards Keighley, and the map suggested we needed to turn right into the town. But no, there was a big brown tourist sign telling us to turn left. So Wensleydale drove right round the roundabout and we continued on our way, looking for another brown sign. Was there one? No, of course not. This is Yorkshire – they’re careful with their money. If tourists want to know where to go they should buy maps or satnavs – or, as it turned out, trust their instincts. After a tour round most of Bingley, we found the route and managed to get to Hawarth - where the brown signs were either very small or non-existent. However we had a gut feeling that what we were looking for was high up so we followed the road up out of the village and eventually found what we were looking for.

In case you haven’t work

ed it out already, this is the Bronte Parsonage Museum – former home of one of my favourite authors and her sisters – Charlotte, Anne and Emily Bronte. [My other favourite author is Miss Austen. Bet you guessed.]

The house is well worth a visit – quite small, very atmospheric, and very interesting. But no cafe!

So, rather than go down into Haworth to try to find a belated lunch, we bought some very nice Bronte biscuits, had a quick look round the church – which isn’t the one the sisters knew, that was demolished in the late 19th century - and headed for home. This time we decided to drive over the moors. Big mistake. The roads were very narrow, very twisty, and full of people going the other way, too fast and in the middle of the road. And the county council had been parsimonious with the road signs again.

Today we decided to go back to Fountains Abbey – our third visit. The journey there was quite exciting as almost all of Nidderdale seemed to be above the cloud base. At times it felt as though we were driving over a narrow bridge with nothing but cloud on either side. Fortunately the road was fairly quiet.

Fountains was free of cloud but amply supplied with children and dogs. We made sure that we actually went round the Abbey this time – on previous visits we had only managed to walk round the water gardens, and to visit the William Burges church in the grounds. 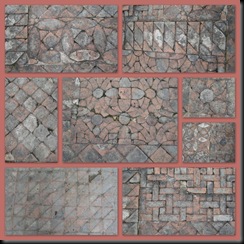 And guess what I found? Tiles! I had read about medieval mosaic tiles but never seen any. Lots of new ideas here …

Today we took our courage in both hands and headed for Hawes. We first went to Hawes about 30 years ago when Cheese Major was in a pushchair and Cheese Minor was just about beginning to be thought about. It was a nice quiet place where it was easy to park, and we found a good cafe with local art on the walls.

We went back to Hawes last year – and hated it. The journey there was along a badly surfaced, twisty road that was very narrow in places and full of cars and vans going too fast. It was also unfortunate that we arrived at lunchtime, when the tour buses were disgorging their passengers to find their lunches and there were people who didn't know where they were going wandering all over the place.

But I had discovered there was a textile exhibition in the Dales Museum in Hawes – so bravely Wensleydale agreed to go.

In my genealogical researches I have discovered that Wensleydale has an ancestor who came from Langstrothdale, which happens to be the next dale up from the cottage and a back way into Hawes – so we decided to got that way. And it was beautiful. Sparkling streams, sheep, stone cottages, sheep, stunning views, sheep – you get the picture. It was also narrow and twisty in places but as there was little other traffic that was not a problem.

The exhibition was pretty good too – work by Ruth Lee, inspired by artefacts from the museum, mostly knitting sheathes and Dent gloves. It was clearly also inspired by the scenery of the dales. I knew Lee as a knitter so it was good to see her other work – felting, embroidery, and screen printing on to fabric. It made me wish I hadn’t junked my old knitting machine.

Then we went to Bolton Castle for tea. Earl Grey, fruit cake still warm from the oven, and a slice of Wensleydale. The cheese that is. It’s a Yorkshire habit to eat Wensleydale cheese with fruit cake, and well worth trying. 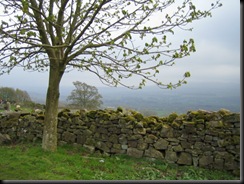 When we went to Bolton Castle last year I took an atmospheric photo of a tree against a lowering sky.

So here’s another one. Not quite as grey as it was last year - and it didn’t snow on the way home.

Our last day, so we went into Skipton to buy some cheese and some fents, and to have lunch in out favourite cafe. Then, following on the genealogical theme, we went across the county border to Bolton-by-Bowland, where my grandmother was born. It is a beautiful little village, probably little changed since she lived there at the end of the 19th century. Unfortunately the family only lived there for a short time before returning to Manchester – visiting her would have been much less of an ordeal than it was, if she had still lived there.

The less said about our journey home the better. So I shall proceed to tell you about it. The weather was beautiful. The journey was straightforward until the dreaded words appeared on the M6 warning signs ‘Motorway closed ahead’.

I once complained that on the journey north we seemed to spend hours in the Midlands and flash through Cheshire in about 10  minutes. This had clearly tempted fate.

We left the motorway to avoid the closure – as, of course, did a lot of other people. I won’t say we saw a lot of my native county – but we had plenty of time to study what we did see, in great detail. And quite a lot of Staffordshire as well.  However we got home safely and only about an hour later than expected.

welcome back - I missed you. Glad you had a good holiday. Bad luck over the trip back.

I've really enjoyed reading your post Celia. You brought back memories as I've been to quite a few of the places you mentioned including Hawes with a coach party! The tile patterns in your mosaic are inspiring. I'm sure you'll be developing them in some work before long.