Going round in circles.

Our trip was very enjoyable, although it might not have been. We set out to visit this, armed with a grid reference and a printout, dated June, that said it would be in place for about two months. We had an enjoyable drive down to that bit of Wiltshire and drove round in circles trying to find it – without success. [A further Google – which I should have done before we set out, revealed that it has been dismantled :(] 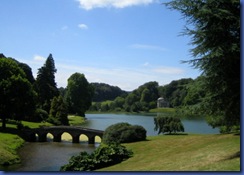 However, in our unsuccessful attempts to find something which no longer exists, we noticed signposts to somewhere which I have been saying we ought to visit for years – ever since I first realised it wasn’t that far away.

This is Stourhead, which is every bit as magical as I thought it would be. We managed a circular tour of the lake, b 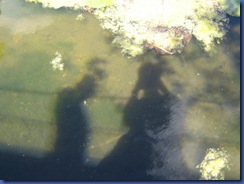 ut missed out the house, as as we didn’t have the legs for that as well, I took a few photographs of views, trees, flowers, stones and shadows.

And us. My hips aren’t really that big, I like to believe.

So disaster was turned into triumph and we had a great day out, topped off by NT tea and cake, and a visit to the Stourhead Farm Shop – well, we couldn’t resist a sign which promised 31 varieties of cheese. [We only bought 3 – the Partridge Blue is great but we haven’t tried the other two – Smoke Acre and Wyfe of Bath - yet.]

I suppose that’s more of a progression than a circle – but the next one I worked with is definitely circular.

I don’t think I showed you the top image – an almost proper drawing, starting from a magazine photo, which I made  a few days ago. As usual I scanned it as a negative [second image], and then, as I was in the mood, printed it on black paper and Inkaid [third image]. That one is going into the homework book too – but just to see what happened, I scanned it as a negative again – and it’s almost back to the beginning.

I really like printing on the Inkaid – on the newspaper it makes it stiff enough to go through the printer and partly obliterates what’s underneath, which is good, and on any paper it adds texture to the print. Ever the cheapskate, I’m thinking of trying paper painted or sponged with emulsion paint, to see how that works.