Several weeks ago, I offered to make one of these for Babybel, who is into dollies – or was then. 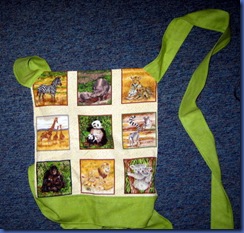 And the weeks passed, and I lost the instructions, and I forgot about it – but when I was having a tidy up earlier in the week, I found the print-out – and then I found some fabric – and I felt like doing a bit of straightforward sewing – so here’s my version.

Slightly modified as I had to cut my doll sling according to my cloth, but the instructions were clear and it went together quickly.

So, flushed with success, I decided to make a bag as well, using some similar fabric from the stash and a magazine pattern.

I have ranted written before about my difficulties with a magazine pattern. This one was no better. From the mysterious metre of bondaweb mentioned in the list of materials, which never appeared again, to the ‘you what?’ instructions for the straps, to the downright wrong instructions for sewing up the main bag piece. Not sure if it was badly written in the first place or badly subedited [do sub-editors still exist?] – but if you didn’t have  any experience of making bags you would have ended up very frustrated, and with a back pack with it’s straps on the side rather than the back of the bag.

It is finished, but as with the last one it is an odd size – a backpack which looks as if it is meant for an adult but with straps only long enough for a child. I think it will probably become a toy bag!

Next time you see me tempted by a magazine pattern, warn me off!

Any problems with this are entirely my own fault. It is, as I’m sure you recognise, a knitted book.

I was not so foolish  to think that I was the first person to think of knitting books, but Google only came up with knitted book covers. But then, when I fossicked around Aimee Lee’s website, where I'd gone to drool over her sari book, I found this and this and this - and a lot of other wonderful stuff.

I love the materials Lee uses – not that I want to copy her, but I do think I need to explore other colours and textures. Having said that, mine feels lovely – soft and squishy. More experimentation needed.

It’s definitely not a drawing though.