That Louise Bourgeois had made a fabric book? - this one, which I find quite inspirational. It has a vintage feel, like fabric samples in old trade catalogues. Thanks to the Peter Blum Gallery for putting images of all the pages on line, so those of us who can only dream of owning a Bourgeois can admire. Thanks too, to Green Chair Press for posting these and other links about the books – and about this book about Bourgeois’ fabric works, which has gone on my wish list. It seems to be due to be released in the UK in October but is much cheaper from Amazon in the US, where it’s not due out till next year. Either way it will have to wait till I've saved up  - or dropped enough hints about Christmas presents …

My fabric books may no 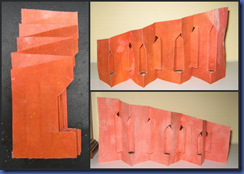 t be up to Bourgeois’ standard - I’ll be able to spell her name by the time I’ve finished this post – but I’m having fun with them. I’ve been playing around with different folded books, like this one. It’s a shaped concertina with pop-ups, which reminds Wensleydale of cathedral windows. This is almost the last piece of the painted fusible interfacing fused to hand-dye [PFIFTHD] – but I like it so much I've made some more. [I should make clear it’s not the colour I like, but the feel, weight and stiffness, which work well for books. As you can see. However, there is no mark-making and its 3D, so I don’t think I can call it a drawing. :>( 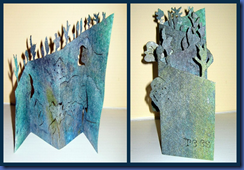 However this one has marks and folds flat – so a drawing it is. It’s inspired by one in Heather Weston’s ‘Handmade Books’ [the one middle right on the cover] but made with Lutradur rather than paper, and cut with a soldering iron. I think I got the angle a bit too steep, but I like the contrast between the different sides of the Lutradur which the folding brings out.

Finally, the one I like least. This is another [and the last, thank goodness] piece of the yucky painted calico, which for some reason reminded me of a map. And as I’d reached the map-fold page in Sue Doggett’s book, I added some map-like lines of black satin stitch and a fake leather cover.  Lines – so it’s a drawing, right? Which, together with the sea book from the other day, brings the total to 81.

One thing I do like about it, is the flatness of the finished book, and the way the image gradually appears as you unfold it. It would be interesting to add holes, so that the rather nice back view was more visible – may get the scissors out tomorrow.

But tonight, as there’s nought on telly, I'm going to play with this. It looks like fun.