Today I finally got down to finishing off Compass/No Direction Home [still haven’t made up my mind]. Yes, nearly a week has passed since I wrote that I had started it, but one or two things got in the way. Good things, like exhibitions, trips and watching exciting cycling - middling things lie taking another hourly series of photos of ‘Mirror’ [slide show here] – and less good things, like visits to the dental hygienist. Plus the piece itself took longer than expected.

You may notice a slight discrepancy between this – my sketch…

and this – my prepared materials.  Unfortunately I didn’t, until I came to assemble the piece. I needed 18 tubes and I had only made 9 [couldn’t even count the 8 I thought I was making properly…]

So I had to make another lot – and as that involved three coats of wax on each, it took a while.

Then life intervened, and it was only today that I got down to the final assembly – or so I thought. 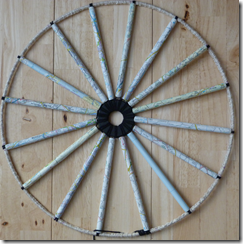 Mmm – think that outer ring needs to be black, not cream.

I was despairingly thinking of taking the scissors to the whole thing when W. suggested I over-wrapped the cream yarn with the black yarn. Told you he was wonderful.

Now I just need some interesting TV which I don’t actually have to watch, and I can get it done. [Wrapping yarn round a lampshade ring is not the most exciting activity I have ever tried.]

Our trip out was yesterday: it dawned on me that because it was exam board at college I had a day off. We decided to g 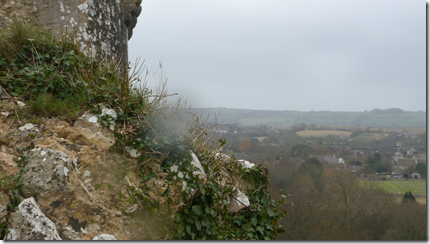 o to Corfe Castle, which is one of those places we kept saying we should go to. without actually doing so.

W. described the weather as ‘atmospheric’ – by which he meant it was cold, windy and wet. As you can see. So we scuttled round, indulged in a little retail therapy at the National Trust shop, and came home via Walford Mill, where there was an interesting exhibition of Brazilian jewellery made from recycled materials. Very inspirational, although some of the recycling was a bit out of my league.

The tea and toasted teacakes were pretty good too.