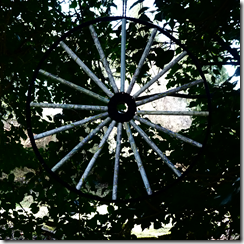 The piece formerly known as ‘Compass’ – or possibly ‘No Direction Home’ – but now known as ‘Road Atlas’.

Finishing Road Atlas – and college starting again on Wednesday – concentrated the mind and I started exploring a new idea for a large network of tubes arranged in diamonds and equilateral triangles – and when I say large, I mean large, a couple of metres across, at least.

This was a good example of why it is always a good idea to make a sample. Working out the thread path was difficult – I ended up either with knots, or going round almost every section at least twice. And although I think a larger piece might have behaved more the way I was expecting, the small piece lost its shape and wouldn’t hang flat. I could have persevered but I decided I didn't have the time to spend weeks making lots of tubes only to find it didn’t work.

It was time for Plan B – which at Cheese Acres is thinking of Plan C. Plan C is either making tubes for some other ideas [3D pieces] or getting back

to the prayer flags.

But I needed a bit of instant gratification, so I made a book – a pipe cleaner bound notebook, adapted to international paper sizes, and some odd leftovers of paper.

I think it would be a great thing to make with children, as intended – however I wish I’d made it A5 instead of A4, and I shall replace the pipe cleaners with thread. But instantly gratifying it was.