Of bibs, blogs and broken promises. 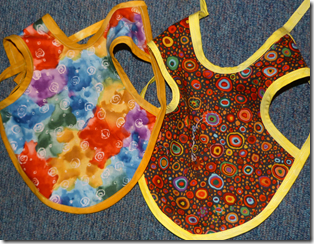 Two more bibs for the VHC, of the over-the-shoulder type his mummy prefers, especially when his big sister feeds him…

Not, perhaps, typical fabric for bibs, but it was in the stash, it is  bright and cheerful, and a few blobs of puréed whatever will only add to the patterns!

Making bibs, although they are a bit fiddly, was a blessed relief from wrestling with Wordpress. I kept saying to myself that Blogger is so much easier, but then I remembered the tears and tantrums before I started using Windows Livewriter, and that I've never tried to do such complicated things with Blogger as I am trying with Wordpress, so perhaps I am being unfair.

However, progress has been made on my website, and I have [probably stupidly], started an associated blog, which will give more details of my college work than I write here. If you are interested you can find the links in the column at the right.They are still works in progress, especially the blog, so bear with me while I beat Wordpress into submission. And if anyone out there considers themselves a Wordpress expert, I have questions. Many, many questions…

And the broken promises? Well, I may have mentioned one or twice that I was trying to complete this course without buying anything apart from thread, glue etc. ‘Reduce, reuse, recycle’ I keep pontificating.

While I was contextualising the personal cloths, I came across the beautiful work of Joakim Kaminsky and Maria Poll. So I bought – bought! some mirror fabric, admired it – and moved on.

Then,  wandering round B&Q last Wednesday I succumbed to some neon string. Well, it was ‘10% off for geriatrics’ day.

And about 2 a.m. on Thursday morning, I had a bright idea. I know from past experience that what seems like a good idea at 2 a.m can seem like a very stupid one at 2 p.m. but I persisted with this one, and that afternoon I cut my mirror fabric into pieces, rolled them up, glued them with glue dots and went off for my tea.

The next morning 39 of the 40 rolls had come unrolled. Sigh.

I detached each one from its siblings [they had, of course, stuck firmly to each other], and rerolled them, masterfully, They still unrolled. So I searched through my supply of glues and came across something called ‘Letratac Super Strength Adhesive Dots’. When I opened it it turned out to be adhesive tape, but I’m glad to say it did the trick. I rerolled all 40 tubes and went to lie down in a darkened room.

This morning, they were still rolled – so I tied them down before they could escape. 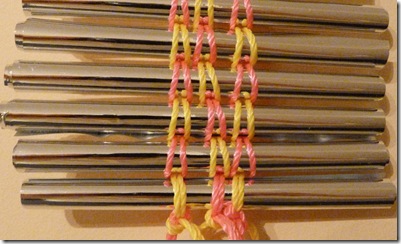 Here’s a close up for Karen. This is a more accurate picture of the colour of the string, except it isn’t quite bright enough. The string was a bit of a problem, because it didn’t want to stay knotted, but W. came up with some suitable glue [at least I didn’t have to  buy that]. I was going to put it in the garden, but then it dawned on me that it is effectively a giant bird scarer – and having just bought a rather expensive ‘squirrel proof’ bird feeder, I didn’t want to scare the little tweeters off.

So I decided to put it out for a day and photograph it hourly from dawn to dusk. But to be effective, that means having the camera in exactly the same place  each time.

I ordered a tripod from Amazon.

Mmm – I reckon this piece is going to cost me about £40. So much for ‘reduce, reuse, recycle’. The next piece is going to be made out of sawn up windfall branches from the garden and already bought string – I can’t afford anything else – and I think it will make an interesting contrast.

Speaking of broken promises – the BBC weather service promised me it wasn't going to snow here.

They lied. Outdoor photography may be postponed for a while. Anyway, the tripod hasn’t arrived yet.