Sometimes I stick to the plan.

Today’s plan was to get up at dawn and photograph ‘Mirror’ in the wild, at hourly intervals.

Unfortunately he who can hear the alarm clock had a different idea as to what constituted ‘dawn’ than I did – so it was 7.30 when I started – and the the hourly intervals got a bit fluid. But I have 11 more or less evenly spaced photos. Until mid-afternoon it was uniformly grey and overcast, so there isn’t much difference in the photos, and I think I may have to do it again.

I have persuaded Picasa to make a slide show which is on Google+ and with any luck it is visible here, but as a confirmed Luddite I wouldn’t be at all surprised if it didn't work.

Popping out into the [literally] freezing garden every hour meant that I couldn’t settle to anything too engrossing, so not much else was achieved, apart from the usual Thursday photos and a few more samples – the plastic wrapping I forgot, and a couple of shaped wraps, All a bit so-so.

I think that’s it for tube samples – I haven’t experimented with colouring them, because I prefer the ‘natural’ colours – or the bleached versions. Of course I used Brusho on several of the bits which are out in the garden now, but I don’t think I will do it again. The most successful were the globs of black acrylic on Storm Cones, which I might repeat.

I do want to sample some painted/collaged paper for making books [yes, back to that again] but as the temperature of the painting studio conservatory is only slightly above that of the garden, I don’t see myself doing that any time soon. 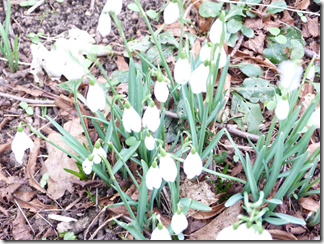 Earlier in the week, feeling a bit  housebound, we braved the cold to go and look at snowdrops at Kingston Lacey – and very pretty they were. The soup and chocolate cake in the restaurant were pretty good too. 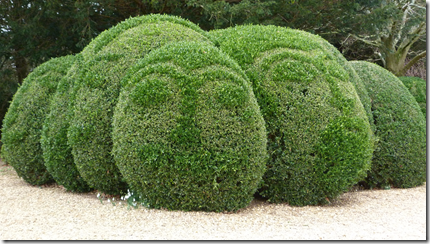 But I liked these best. According to a member of staff we spoke to, one of the gardeners has a degree in sculpture, and she had been let loose with her shears on some of the shrubs. Definitely the best topiary I've ever seen!