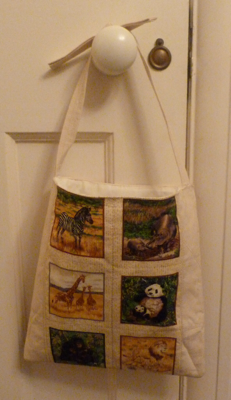 This is the bag. The VHC has taken to a little Christmas bag I made for his sister, and it has proved quite useful for carrying the things hè likes to take around with him. Like juice, and Thomas books, and other essentials. This was going to be a Christmas present, but I think he may get it early because it makes granny and granddad's life easier. The handle is like that because it is adjustable as one grows. I made it fairly quickly yesterday morning, with bits and bobs from the stadh. 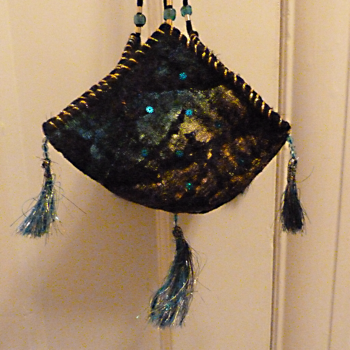 The baggage, on the other hand, was not quickly made.

It is some of the velvet which I roller-printed after the last CTW session. It was going to be a Dorothy bag, but after I found Alysn Midgelow-Marsden's instructions here for 'spice bags' it became this, although the techniques are different to hers.

Still, I like the result. Totally useless of course, but a good way to show off a bit of stitching.

The other thing I finished this weekend was a third and final (?) blanket. I forgot to photograph it before I washed it and as I'm unwilling to wrestle it off the drier to repair the omission, you will just have to imagine a large, dark blue, square woolly thing. As I finished it half way through the last episode ever of 'Borgen', (sob, sob, weep, weep) I had to find some more subtitle-reading knitting, so I started something very slightly smaller.

Socks. I have too much sock wool, although not as much too much as I had Shetland, so Saturday nights,  for the foreseeable future until I get bored, will be sock knitting nights. Assuming there are subtitles to read, although 'The Bridge' seems to be returning in the New Year. Worth watching if you missed it the first time, and even if you didn't.

This afternoon has been spent wrestling with a Christmas tree (him) and with present wrapping and card writing (me). Soon to be followed, I hope, by a cup of tea and a mince pie. I am generally of the Scrooge persuasion at Christmas, but some things I like - mince pies, trees, and school Christmas concerts. We went to one of those last week, and have another at nursery this week. Can't wait!