Three down, two to go. 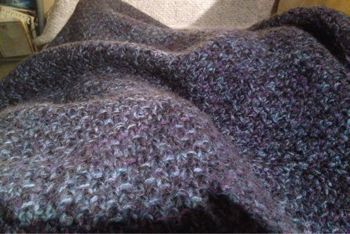 The three down are:

1. The aforementioned blue blanket, doing its job on a stormy night. 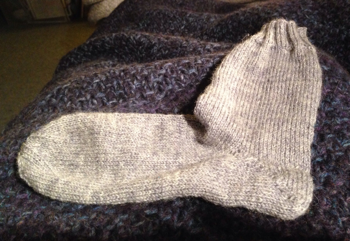 2. One sock, rather strange around the heel. 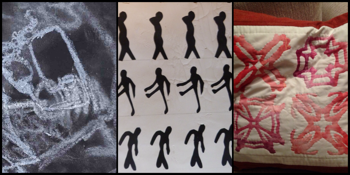 3. A cushion cover, which emerged from a drawing I did at the last Visual Marks session, via some tracing paper, some sort-of paper dolls, inspiration from Greek vases, and finding a transfer dye paper bag in my search for Greek vase coloured paper.

Did I intend to make a cushion cover? No.

Did I need a cushion cover? Yes, but not one like this.

You did realise that I'm nuts, didn't you?

The two to go are: 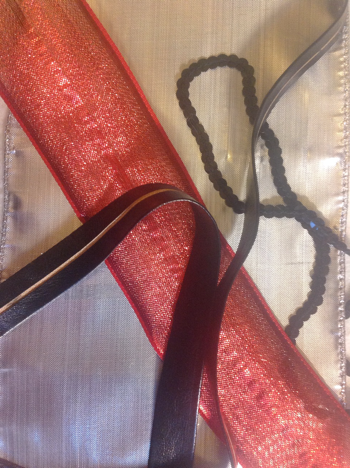 2. 'The Chairperson's Challenge'. I wasn't able to make the Christmas get-together of Visual Marks, as it coincided with W's birthday, but a challenge was issued by our chair, E. and the materials for it reached me by a circuitous route. These are they.

I don't know how she realised that our Christmas decorations are red and silver, but they are. 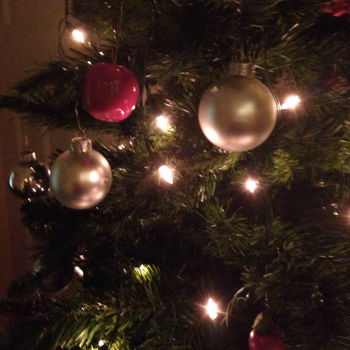 So - how to rise to the challenge? My first response was tree decorations, but he who is in charge of tree decorating is very fussy particular about what goes on the tree. Silver balls and litte red apples. So even red and silver hand made decorations might not pass the test. In any case, they wouldn't be finished in time. (He is very particular about the timing of Christmas decorations as well - up on his birthday, down on Twelfth Night.)

Then I thought about a crazy patchwork something - perhaps a cushion cover? But I need a red and silver cushion cover even less than I need a rusty brown one...

So my current thinking is a banner, provided I can find a suitable backing fabric and extras in the stash. 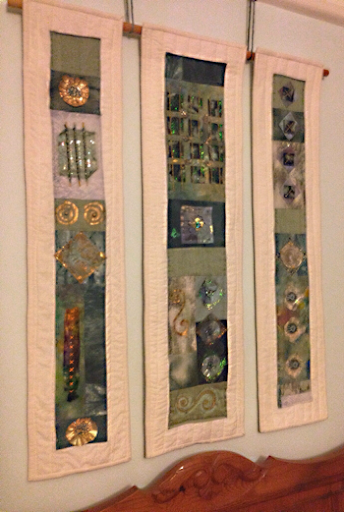 Something  like these, which were also made in response to a challenge, to use a range of processes and materials which I cannot now remember.

(Sorry for the lousy photo, for some reason I've never managed to take a good one of this hanging.)

I probably wouldn't make three, but it would be a chance to use up some of the red and silver in my stash - although I think there is more silver than red. It's that sort of stash... 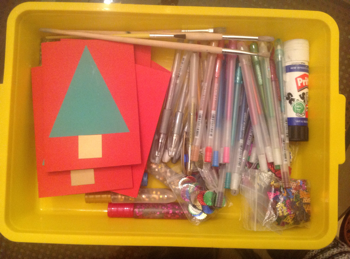 We are being invaded by the little guys tomorrow, so all thought of needlework must be put on one side till they go home on Monday.

There may, however, be some mixed media work.

Yes, that is a cat litter tray, but I promise it has never been used by a cat. They make very useful storage trays (thanks to fellow stitched textiles graduate K. for the idea), as well as being brilliant for dyeing, paper making and all sorts of wet activities.

So, as I am unlikely to blog again until The Big Day, a Happy Christmas to all my readers!