The trees across the road, however, didn't. Literally 'across the road', as you can see. One came down early on Christmas Eve morning, and others were left leaning at nasty angles, and were taken down.

Fortunately no-one was hurt, though neighbours lost their land lines, and the street lights are (mostly) out.

Also fortunately, it happened after we had taken the little guys home, as I think they might have found it a bit scary - although the VHC would have enjoyed watching the trucks and workmen. 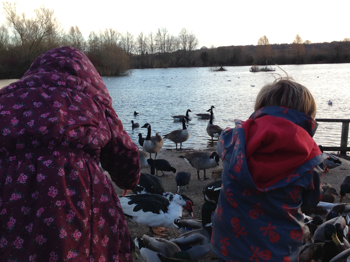 We had a good time while they were with us - some duck feeding, 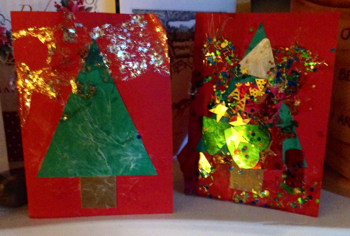 some card making (we hope to get all the glitter out of the carpet by next Christmas), some 'Snowman' watching (scary to realise that when we first watched it with her daddy, he was about Babybel's age), and an abbreviated trip to Mottisfont because they were closing early because of the wind.

We did manage to attend the Snow Queen's Ball, which Babybel adored - dressing up in pretty things and dancing, what could be better? The VHC, on the other hand, was a bit overcome, and preferred to keep his opinions under his hat.

Speaking of his hat, does it remind anyone else of 'Rocky Horror'?

After all that excitement, it was good to have a very peaceful Christmas Day on our own, before getting together with the little guys and their parents on Boxing Day.

It has been pretty quiet since then as well, which has meant I've been able to get on with the Chairman's Challenge.

I found the bottom of one of the bathroom curtains in the stash, which wasperfect  for a backing, and several bits of red, black and silver for a patchwork strip down the middle. It is all just pinned together for now, and it's a dodgy photo anyway, but hopefully you get the idea. 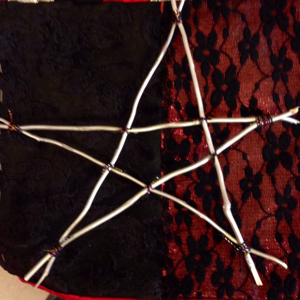 The plan is to add a few stars. This is the first. I knew there was a good reason for keeping those painted twigs from a bunch of dried flowers...

All should continue quiet, weather willing, until New Year's Eve when we get together with the other half of the family, plus the Spanish contingent, who are coming over for a visit. Weather willing!

I hope all my UK readers have also escaped the worst of the gales ((and anyone else who's had bad weather) and that you will continue to do so, as more is predicted here.