How to set priorities and manage your time. By an expert.

I knew this was going to be a busy week, including as it did a birthday do, two childminding days and a meeting of Visual Marks.

The birthday do (mine) was at Winchester Science Centre (followed by cake at home) and I think that a good time was had by all.

I can't comment on the quality of the Visual Marks session because I led it this month, talking about using mind maps, word association etc. in designing. We played an adaptation of 'embroidery consequences', which I found here. As a result I have to make a 16", oval collage, which includes lace and felt, which is inspired by the sea, and, which, fortuitously, is sea green in colour. And as it was my idea I feel obliged to have a go. Add all that to the book of the week, the work for Contemporary Textiles and the ongoing knitting, and I had plenty to do.

Unfortunately I had forgotten that an on-line course I had signed up for started this week.

The course is Dionne Swift's 'Drawing for Textiles' and having previously taken her 'Developing Sketchbooks' course, (it was good, that's why I signed up for another one) I knew that she would be giving us plenty to do - and I couldn't start till Wednesday.

So in the best principles of time management I made a prioritised list.

1. Dionne's course - daily exercises of up to an hour, to be done this week.

3. My piece for Visual Marks, plus making some stamps, both for next month.

4. The self-imposed nine part series for Contemporary Textiles Workshop, which is so far away I'm not

even sure when it is - certainly after Easter... 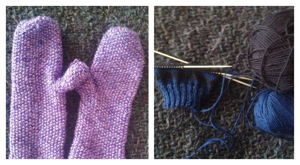 Knitting is an evening, slumped in front of the telly recovering from the day activity, so it gets done no matter what, and I managed to finish the mittens which started off as socks, and start another pair of socks. (The mittens, and the cowl I made earlier, will, of course, ensure there is no repeat of last year's end of March snow.)

So what did I spend Wednesday and Friday doing? 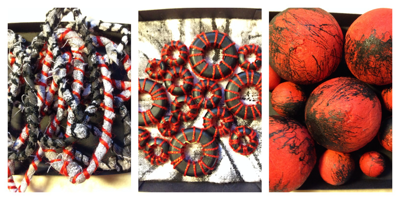 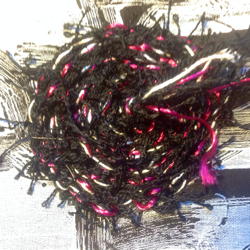 Plus I've got the makings of two more, and then there's this, using a twisted cord I made earlier. It seemed like a good idea at the time.

I know what it makes me think of, but if W thinks I'm making another and wearing them, he's being uncharacteristically optimistic.

To be fair to myself, I have spent today having fun layering blind contour drawings, tracing shadows (when there were any shadows to trace), and drawing curved objects using 30cm or 10cm straight lines. Next up is drawing with different media on a long stick, and pattern making with extracts from the drawings - but I've got an app for that... Next week we move on to textiles.

After that I was knackered - so I thought I'd make the book. Earlier in the week, in a fit of optimism, I had pulled out my Tarot Artists' Book Ideation Cards, which suggested I make a manifesto based (!?!), whimsical book, with an asymmetrical, innovative structure, in neutral, muted or pastel colours, including transparency and pockets or windows, using high tech techniques and abstract, non-verbal or garbled text, and collaborating with another artist for the images. So no pressure there.

Needless to say, I decided to ignore all that and make something really simple and quick. I pulled out Esther K. Smith's 'How to Make Books' which has some interesting versions of simple forms, and spotted an 'instant book' made from an envelope. Good, I have envelopes.

I happened to choose one with a window in it.

You may be able to see where this is leading... 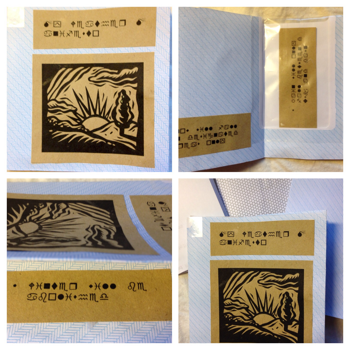 I thought I could describe it as whimsical, and the colour was muted, so that's another four out of nine. But it wasn't asymmetrical. Could I fold an asymmetrical one? Three books later (you can see them bottom right - the first book, one try-out which worked, one attempt at the real thing which didn't work because I didn't follow the techniques I'd tried out, and my final successful attempt) I had my book. And I decided it was innovative. So that was six! I was two thirds of the way there!

The next problem was to decide what 'manifesto-based' meant. Well, I still don't know, but I know what a manifesto is, so I wrote my own, and used Wingdings to type it out (high tech and garbled text in one go!). I was rather pleased that the Wingdings symbol for the first letter of the title is a bomb, it seemed appropriately manifesto-ish, although mine is entirely peaceful.

So there was just the collaborative image. Well, I can't claim that whoever designs clip art for Microsoft knew s/he was collaborating with me, but, with some difficulty, I found an image which suited my manifesto and added that. (Microsoft were very happy to sell me an expensive copy of Word for my Mac, but whatever I paid them clearly was not enough to persuade them to make it easy to find or download clip art from their website...)

So much for my quick, simple book!

Tomorrow will be spent drawing with things on sticks and making stamps. Or not, as the case may be.

* i assume that you, gentle reader, recognise irony when you meet it.