The good, the bad and the ugly. 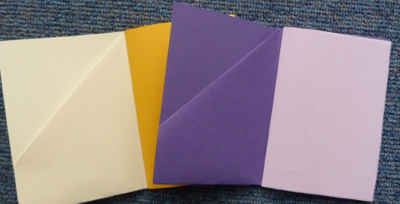 I didn't think I would have time for a book of the week this week, but the combination of an insomniac night (bad) and coming across the instructions for these little things (good) meant that I managed to make two in about 10 minutes. I stuck pretty close to the instructions, but used card for the cover, and a couple of glue dots to keep the pockets in place.

I think the little guys may like to draw in these when they come at the weekend, but they would also make good pocket notebooks, although I would staple or sew those rather than the suggested elastic band binding I've used for these. 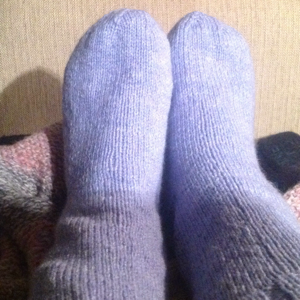 Insomniac nights have also allowed  the completion and testing of the insomniac socks (ugly) which are too big, but reasonably warm - and as W. said, they are big enough to wear another pair underneath on really cold nights. 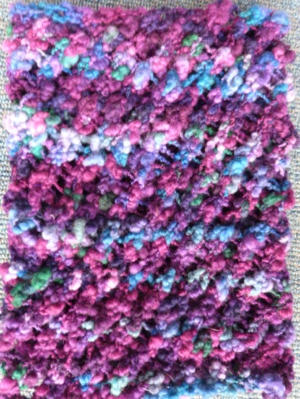 I took a break from socks to make a cowl, inspired by this pattern, I recently bought a fuchsia coat and although I have enough scarves to start a shop, none of them matched. So this single hank of Colinette which has been languishing in the stash for years, was brought out, and I searched Ravelry  for a pattern you can make with 50 metres of lumpy bouclé.

As you can see from the link, mine turned out a little longer than the original - long enough to wear as a hood (good) - and I used about 49 of those metres. However if I did it again - and I might - I would cast on a few more stitches to make it slightly wider. 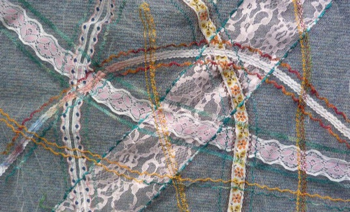 This is definitely ugly. No, I haven't lost my marbles. Well, I don't think I have.

When I took my sketchbook to the last meeting of Visual Marks, E. suggested that the net, lace and machine embroidery samples I'd made could be used for silk screening. I didn't want to use those samples, so I decided to make another one - and realised it was a good opportunity to use up some of the uglier bits of lace in my collection, and to empty a few bobbins. Hence the rather interesting colour combinations. I won't get a chance to try it till after the little guys have been, so watch this space. 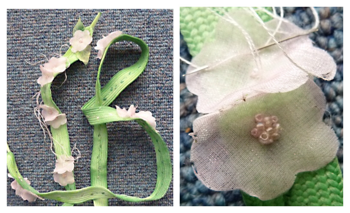 The most recent VM challenge is looking good, although I severely underestimated the number of soldered pink flowers I would need, chiefly because I thought that dotting single ones up and down the lace would work. It didn't. So I have spent the afternoon making several more, and hoping I don't run out of fabric before I've got enough. 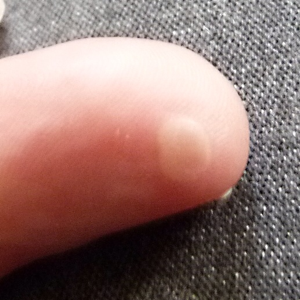 I managed to avoid doing this again with the soldering iron. Definitely bad, although surprisingly unpainful at the moment. I anticipate it getting worse when the blister bursts.

Blister tip:
If you run a fine pin or needle (sterilised in some way like in boiling water) under the the top layer of skin next to the blister, into the space full of fluid. and then drain off the fluid via the resulting 'channel', the old skin still protects while the new skin is developing underneath. It may need a little pressure on the blister to make all the fluid drain away. It also means the area is a lot less tender when you bump it.
Sandy

I'll bet your little guys will love filling up those sweet books that you made! Have you considered doing a bulky sewing on them, using those lovely scraps of lace and ribbon that you're showing in the other photos?
Great giant putple socks.