Life has its little ups and downs.

The week started badly when our child minding journey took nearly three times as long as it normally does - overturned lorry. At the moment, luckily, we are going later and not taking the little guys to school, so there was no desperate need to get there on time, but then if we had been doing our customary silly o'clock trip, we would probably have missed the worst of the congestion. 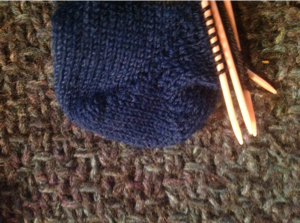 The second down of the week was this. I do know how to turn a heel, honest: but when you get too engrossed in wildly improbable British detective series you can end up turning it twice. Yes, I confess, we were watching 'Midsomer Murders'.

For those not au fait with sock knitting, 'turning the heel' is the process which changes a vertical tube which fits the leg, to a horizontal tube which fits the foot. Working two heels, as I did, would give a sock which turned through 180 rather than 90 degrees. I'd already pulled it out once because it was too narrow, so it took three attempts to get it right.

The pattern is an adaptation of this one with different heels and toes, but the errors I made are all mine.

However, those downs were more than balanced by the ups, chiefly the completion of numbers 3 (well, in part) and 4 on last week's 'to do' list.

3. My piece for Visual Marks, plus making some stamps, both for next month.

4. The self-imposed nine part series for Contemporary Textiles Workshop, for after Easter. 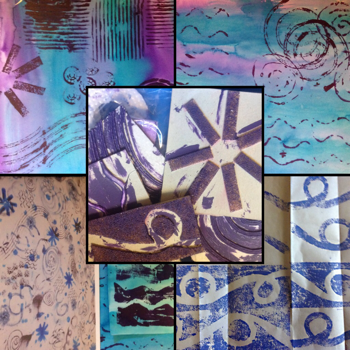 Here are the stamps, and my test stampings.  The image in the centre shows the cloth we painted at Visual Marks, which inspired it all. What we are going to do with them will be revealed at the next meeting... 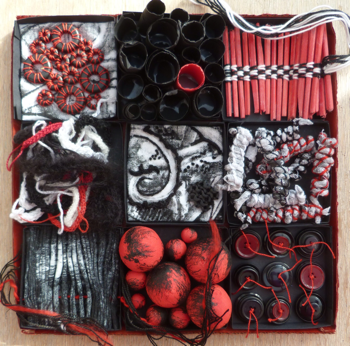 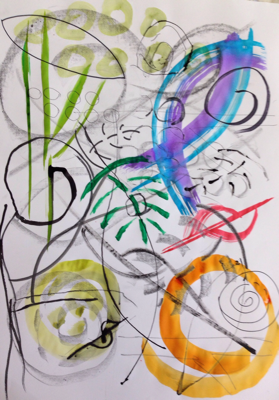 I realised that although my original intention had been to represent everyone's marks from the original exercise, (see left), I'd ended up mostly doing circles and lines. So I converted the sort-of-leaf shapes into spirals, made some more lines and circles, constructed an outer box and called it done.

I enjoyed doing it, which is probably why I let it take priority over more urgent things. I've made odd little things in boxes before, and there may possibly be more in my future, when I've decided what I want to do when I grow up - apart from being Scandinavian, which is already decided (or Welsh). (Indecisive, moi?) 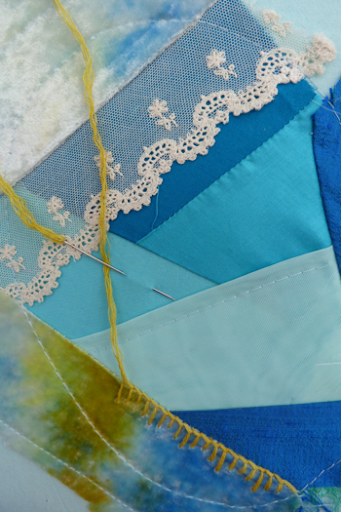 Today I've started my challenge for Visual Marks - the thing which has to be a 16" oval collage, including lace and felt, inspired by the sea, and sea green in colour.

The first two criteria were my biggest problem - I usually work smaller or much bigger than 16", and the thought of a 16" oval was very scary uninspirational. But then I realised that A3 paper is just over 16" on the longer side, and if you fold it in half you get A4-ish book pages. So I could make a book and put a sea themed oval cartouche on the front. That was a step forward, but I was fixated on the idea that the cartouche would have to contain a representational image of the sea - you know, beach, sea, sky, waves, maybe a dinghy and some seagulls - and I don't do representational. Plus I had a bit of Shakespeare running through my head - this bit.

Of his bones are coral made;

Those are pearls that were his eyes:

Nothing of him that doth fade,

But doth suffer a sea-change

Into something rich and strange.

My problem was solved when I decided that 'something rich and strange' could be silks, satins, beads, maybe a few pearls - in crazy patchwork. Well, crazy patchwork is sort of like collage, isn't it? So, after Googling how to draw an oval, I started.

1. This week's work for Dionne's course -which I intend to tackle tomorrow.

2. The Visual Marks crazy patchwork for next month.

3. Book of the week - also for tomorrow, unless I run out of time, when number 2 will have to stand in.

4. The other sock. Preferably without three attempts at the heel.

You make me tired just to read this. But then again, you make me laugh. I can't imagine what life would be like if I wrote down all the steps and wanderings I went through to get where I think I mean to head!
Have fun!
Sandy