As I remember, bracing myself for the invasion of the little guys. But before that, I went to another session of the Contemporary Textiles Workshop, which was not what quite what I was expecting. We had been told to bring sticks and wire, so I was anticipating 3D constructions of a type I've done before.

We started with a communal mark making activity on paper, similar to those we've done at Visual Marks. We picked a mark and made it repeatedly on each sheet of paper, using a variety of media. The papers were torn up, and we all got 4 pieces to inspire us in working on a series ('a series is more than two') of 3D pieces. Which had to fit into a cup.

The marks included circles, spirals, leaf and tree like marks, and my split circle with a line through it which has developed from my initials. The difficulty was, of course, moving from 2D to 3D, but in my bedtime reading I'd come across some designs made with what I can only describe as overgrown quilling, in circular frames. Inspired by the circle and spirals I decided to use torn paper strips to make short tubes (now what does that remind me of?), but in a square frame because it was easier to do. I measured the tutor's rather large cup to make sure it would fit. It will, provided I don't get too enthusiastic about making it reach the bottom. Or much beyond the lip, really... 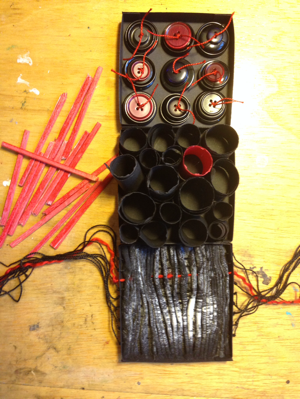 One thing led to another and before long I had two frames. The contents of the second were made from some mono-printed fabric with spirals on it, although as I gathered it you can't see them. However the graininess of the print resembles some of the marks.

I have since made another frame, with added buttons. Circles again. The colour scheme is pretty repetitive for me, too. I have a mad ambition to make 9 in total, and fit them in an outer frame, hence the pile of recycled and painted sushi chopsticks, (which were not the sticks I'd taken and which are now not going to become another piano hinge book). I think things may drift a little from the original inspiration, however...

Everything went onto the back burner, of course, while the little guys were here. The new sleeping arrangements were given their seal of approval - to the extent that we had to go upstairs every couple of hours to look at 'my new Thomas bed'. It was the first thing mummy and daddy were shown when they came to collect the pair. Babybel assured me that the horse blanket was exactly what she had wanted when she asked me to make her one, so that was a success too.

Since Sunday, however, things have not been so successful. The latest pair of socks has been frogged as I realised that there was just not enough wool to make two. I started a pair of mittens/hand warmers (depending on wool consumption) but the first one has also been frogged because I realised that my stitch count was off, and I needed a bigger size.

And my plans to make another 6 framed 3D constructions were put on one side when I got caught up in a major workroom re-organisation. Since last autumn I have been slowly working through all the books in my workroom, deciding which ones to keep, and which to get rid of. (Local charity shops will be receiving several bags of books.)

I wasn't intending to tackle the shelf full of sketchbooks after I had finished all the proper books*and I can't remember now how I got started, but once I had, I had to finish. Most of what I used to call 'sketchbooks' pre C&G, were just scrapbooks, and my tastes have clearly changed since then, so the majority of those have gone in the recycling. (One of the few advantages of having used glue stick is that it was very easy to remove the few images I did want to keep.)

I have preserved almost all of the proper 'sketchbooks' - not that there are many 'sketches' in them, mostly cut paper, prints etc. I was pleased by how interesting I found the pre- and post-degree ones - and surprised by how uninspiring the degree ones were - perhaps a reflection of my lack of confidence about what I was doing?

After I'd sorted the sketchbooks, I had to rearrange all the other books. Good exercise with floor to ceiling shelves. But I now have much less junk on the work surface - all my works in progress in their cat litter trays are neatly stacked on some of the emptied shelves. It won't stay neat for long - and 'neat' is, of course, a relative term... 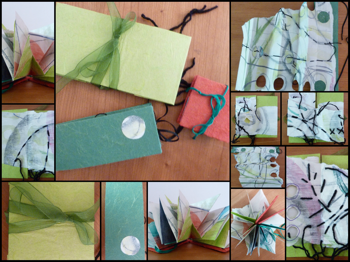 Apart from the sorting and unknitting, not much creative has happened, although I did find time one insomniac night to make a series of books of the week, using the inspirational papers from CTW.

And we managed some gallery visits. We had a day off from grandchild minding on Monday, so went down to Walford Mill to see the Cabinets of Curiosities exhibition - some good stuff. And on Wednesday between Wensleydale's haircut and my birthday lunch, we went to the Discovery Centre to see 'Hidden' - massive photographs of people like Hilda of Whitby and Tom Paine, and events like the Peasants' Revolt and the Swing Riots. No, photography wasn't invented then, but Red Saunders has recreated them on a large and dramatic scale. The accompanying video was well worth looking at, too.

Now I've written all that lot, I wonder why I feel I haven't done much?

*well, those in the workroom - there are a few more in the spare bedroom, which will get the treatment soon.

Thank you ,I have looked at Lois Walpole's work which I had not seen before. Lots of interesting work with unusual materials.2089563899