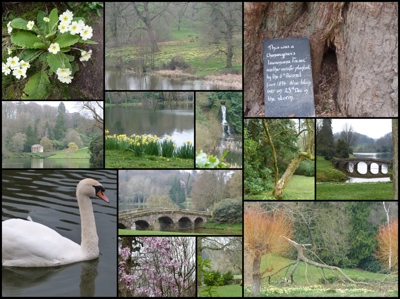 We thought we were going to have an easy week, because we had the day off from child care on Monday. We took the opportunity to go down to Stourhead, walk round the garden, and buy some cheese. (If you got to Stourhead, do go into the farm shop - 30+ varieties of West Country cheese and lots of other goodies.)

The weather wasn't brilliant, but the spring flowers made up for it, although it was sad to see the effects the storms had had on some of the trees.

Tuesday was errands, Wednesday and Thursday were child care (we didn't really have a day off, it just moved - though it was shorter than usual) so it was Friday before I got down to anything serious in the workroom. 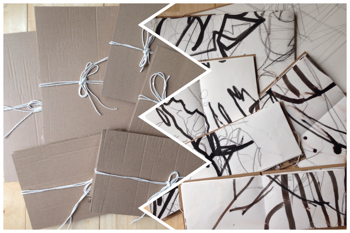 Like book making. Five 'books of the week' plus last week's. I used my drawings from Dionne Swift's course, and every variation of the boustrephodon book I could find - some of them twice.  Some of those pages are quite inspiring! 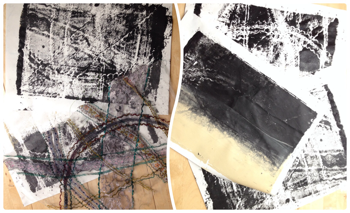 Yesterday I hauled out the screen and tried screen printing from the long neglected bit of net with lace and stitch on it. With very little success, as you can see. The right side resolutely refused to print. The best one was when I printed with nothing under the screen, to use up the paint.

I meant to try using the net with the Gelli plate today, but my arthritis is playing up at the moment, so I decided to spend the afternoon on the sofa with my knitting. But then, when I tried to sort out the photos for this post, iPhoto, on what the VHC calls the high-pad, kept crashing, which meant I had to bite the bullet and deal with the excess of photos I have had on it. Which meant facing up to iPhoto on Big Mac, a far greater challenge. In theory, I save my photos on Big Mac, which has a much bigger memory, and then delete them from the high-pad. In theory I do it every week. In practice - I don't. And because I haven't done it for ages, I couldn't remember what I'd saved and what I hadn't.

But, after an hour or two of muttering and cursing, I have a whole 4.8GB available. Luxury! 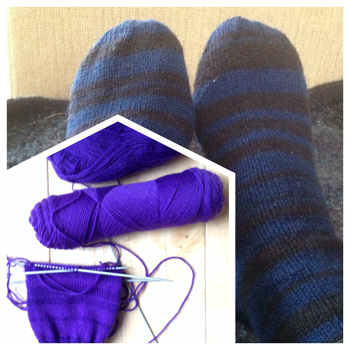 Despite this trauma, the accursed fraternal socks have been completed, with only a small striping error, easily corrected, on the second one, and I have started a second pair, same basic idea, just finer yarn and more stitches. (But why do I keep picking colours which are difficult to distinguish in artifial light?) 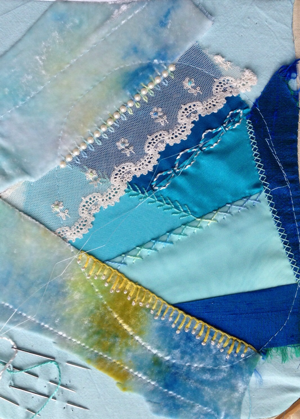 I have also done a little more on 'Full Fathom Five' for Visual Marks.

Next week is the Easter holidays, which means we get to spend more time with the VHC and Babybel.  Trips to Mottisfont and 'Spin Tower' are planned, after which more sofa recovery time will be necessary, assuming the technology will let me...