it was Sunday (I'm always hazy about what day it is between our 'work' on Mondays and Thursdays) I found myself wondering where the week went. And then I realised it went into 3 days with the little guys (albeit shorter days than usual) and three evenings of recovering from 3 days with the little guys. Still, we had fun - an Easter egg hunt at Mottisfont in the rain, the 'spin tower' + a return trip on the Gosport ferry, also in the rain, and, for old times sake, the ducky place in sunshine. (For those not in the know, the Gosport Ferry is Portsmouth's answer to the Staten Island Ferry - just smaller, quicker and with more historical but slightly less spectacular views.  I'd say 'cheaper' as well, but I strongly suspect it isn't.)

OK, that's only 3 days out of 7, but other, mostly less interesting but less tiring grown up activities have got in the way of textiles as well. 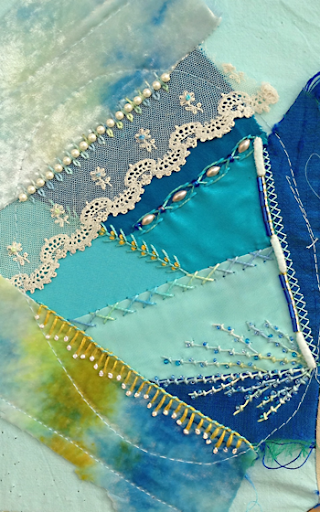 So I have only made slow progress on the Visual Marks challenge - although the pressure eased a little when I realised that I can't go to the meeting next Tuesday, due to extra little guy minding.

Not sure about thad odd bit on the right, the primary purpose of which is to cover up some fraying fabric. I think it will have to come out.

And I still haven't worked out how to get some felt into it, as per the criteria. 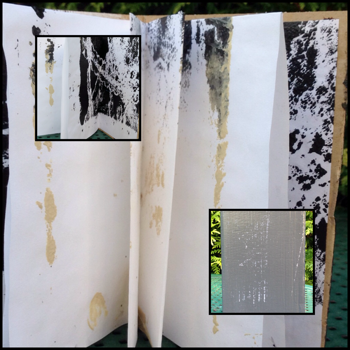 The weekly book was an insomniac quicky (which sounds a bit like something completely different, but for that you need two insomniacs...). A variation on the 'instant book', it is mostly 'here's one I made earlier' - pre-painted card, an unsuccessful screen print from last week, and a bit of glue. I think it needs some stitch, which might have been better done before I stuck on the cover, but it was 2 a.m. And if I'd measured it properly the pages would not have been bigger than the cover. I could trim one side, but if I'd trimmed the central fold the whole thing would have fallen apart, hence the extra fold in the fold. 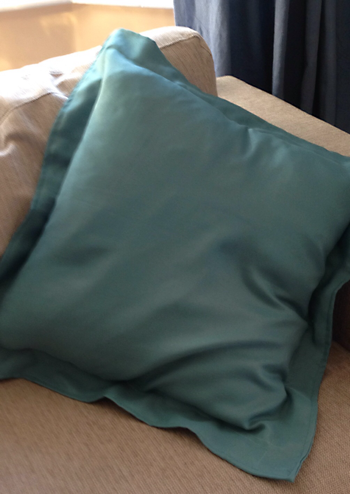 Today was meant to be spent fulfilling a promise I made before Christmas, when I gave the little guys' mum and dad some redundant cushions. As they didn't match their decor, I promised to make some cushion covers for them, but it didn't happen. Fortunately, as it happened, as they have now redecorated and aubergine cushion covers would no longer do.

On Friday I discovered, somewhat to my surprise, that if you go to the right place it is still cheaper to make cushions covers than to buy them. And you don't end up with redundant cushion pads because shop bought covers always seem to come with pads these days.

I haven't made cushion covers for a while and I thought I could whip up four plain ones today. (I remember how long City and Guilds cushions take, but that involves designing, and costing time and money, and embroidering, and rememebring to do something fancy on the back as well because your tutor will always look at the back and fail you if you haven't...)

I can hear the hollow laughter of experienced cushion makers from here.

I managed one. Partly because I changed my mind part way through, and partly because it was my first experience of using continuous zips (why did no one tell me how wonderful they are, even if they only come in the wrong colour?) and I had to Google them. But mostly because it takes longer than I thought it did.

And I'm not sure the little guys' dad will like it anyway, so it is probably better to take this one as a sample and get his opinion before I go any further. 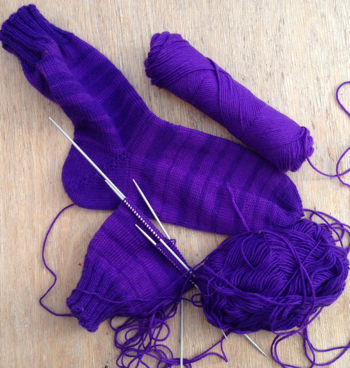 My knitting has been more satisfactory. I discovered another advantage to the random stripes pattern - apart from using up oddments of wool, and it not mattering if you miscount the rows in a stripe. If you think you are in danger of running out of the cuff, heel and toe colour (it has been known) you can make the random stripes a little less random so you use more of the other colour. And you would never have known if I hadn't told you.

Of course you have to be the sort of person who doesn't mind wearing non-matching socks, but I figure anyone who spots that they don't match will only do so because they are grovelling at my feet, when it won't matter.

So glad I was not drinking something when I read this post. Saved me cleening my computer screen. Insomnia quickie, where do you find these things LOL