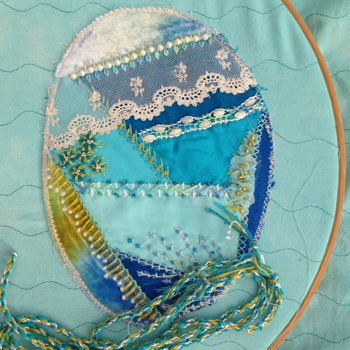 Is it a plane? Is it an Easter egg? No, it's a Visual Marks challenge, as set by me, so I have no-one else to blame. It is the 16" oval collage, including lace and felt, inspired by the sea, and sea green in colour. I've got in everything except the 16", although you may not agree that it is 'sea green'. My choice was based on a 'sea green' T-shirt in a Cotton Traders catalogue, and what I had in the stash.

The 16" (ish) will come when I turn it into an A4 book, A3 paper being 16.5" long. It was going to be this week's book of the week, until it became clear it wasn't - it was harder than I expected to apply the ovalish bit of 'collage'. Hence the cord, which will serve, I hope, to hide the infelicitous edges.

No matter how carefully I preplan my crazy patchwork, it won't be the right size.

Cutting out a perfect oval is difficult impossible.

Even a Bernina doesn't like sewing 2 layers of cotton, 1 of felt and 1 of silk velvet.

Silk velvet is beautiful and evil. 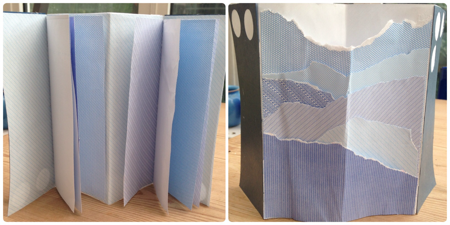 So that meant thinking up plan B. Fortunately a bit of paper with something not unlike this on it fell out of a pile of print outs. I'm not sure where it came from, possibly here, but the original was much neater than mine.

Ironing envelopes with windows in them is not a good idea.

I needed more envelopes than I expected.

Measure twice, cut once. (You would think I would know this by now.)

Cut the landscape pieces very slightly narrower than the accordion.

There was a good reason why I hadn't used up that bit of double sided sticky tape which came in a packet labelled glue dots - and it wasn't just because it wasn't glue dots.

Left over scraps of card with holes punched out of them will find a use eventually.

It is very easy to photograph books upside down without realising. 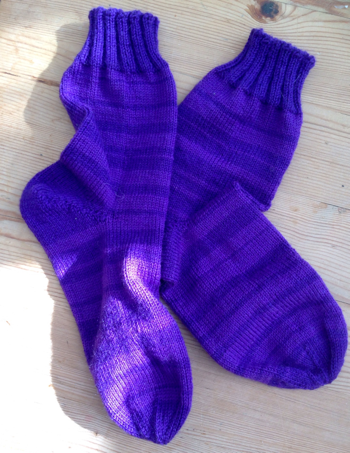 The purple socks were the biggest success of the week, and despite my anxiety I didn't run out of the darker purple. You may wonder if I am becoming buried in socks, but my shop-bought ones continue to wear out (another two went this week), and I have given some to other people. Which leads me to:-

Do not show  nearly-completed purple socks to a purple loving granddaughter. She will covet them, and in exchange for being told they are too big, she will ask demand make it clear that she will be seriously displeased if I do not immediately make something for her.

Fortunately this will be a scarf. No, it's not scarf weather,but she wants a scarf. A purple one - (good, I have a lot of odd balls of purple in my stash).

Until, on the way to Manor Farm, I go with her to Hobbycraft, for purely altruistic reasons (her daddy wants some glass paint)  when she decides she wants pink, which I do not have in my stash.

It is still possible to persuade her that the £££ per ball stuff will not work but the cheap pink acrylic will - although I suspect this will not last. (Lest you think I am a cheapskate - and I am - she is certain to lose this scarf fairly quickly.) 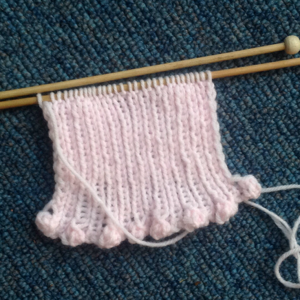 There are several nice free patterns on Ravelry but if you choose this one, cast on a few more stitches than it says - the pattern suggested 18, I cast on 30 and I think I may pull it back and make it a bit wider - and work a couple of extra rows of bobbles while I'm at it. 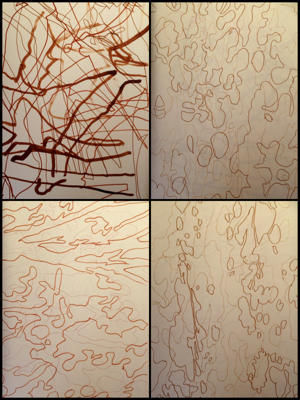 Multiple blind contours work best if there is lots of contrast between the different media - which I didn't have.

Shadows move quickly, even if it isn't very windy.

My aged joints are not keen on sitting/kneeling on the ground to draw on A1 sheets of paper.

When you are tracing shadows the only cloud in an otherwise cloudless sky will move across the sun.

Despite all this, tracing shadows is fun and I got some interesting patterns.

What I haven't learned worked out is what to do next with them.