Since last summer, I've been working slowly, steadily and determinedly through my stash. Stuff like Lutradur and Evolon that I had bought and never used has been tried out, evaluated and, if found wanting, passed on or binned. The knitting machine has found a new home, hand blanket knitting has noticeably reduced the boxes of coned yarns and a similar attack is taking place on the sock wool, as you may have noticed. Books have been looked through and in many cases passed on to charity.

As part of the blitz, I looked through my accumulated sketchbooks - and, rather worryingly, came to the conclusion that I was more creative before I started the degree than I am now. Regular readers may remember that the muse definitely left Cheese Acres soon after I finished the degree, and although she moved back in, I felt that some of the ideas I had between finishing City and Guilds and starting the degree were better than those I've had since.

The second, related conclusion is that I should stop worrying about making art with a message, and choose themes that I like. What do I like? Well, what do I photograph, apart from grandchildren? Flowers, trees, landscapes. And it's not just because, unlike grandchildren, they stand still, most of the time. I've always felt that these are a bit hackneyed, a bit old fashioned, not what I should be doing - well, stuff that, I've already had some fun with flowers, so let's give trees a go.

So I made the blind contour, shadow and paintbrush on a stick drawings I mentioned before, and then I started a tree sketchbook. I stuck in a photo from our last trip to Stourhead, made a couple of colour studies a la Karen Ruane, and - to my own amazement, a drawing, which I think isn't bad. I told myself that as I wasn't going to embroider a detailed image of the tree, I should focus on what I was interested in - the interlacing of the trunks and branches. 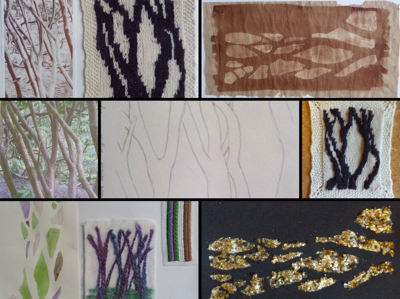 What I had forgotten is the way that, when you follow up an idea with no preconceptions about where the journey will take you, the ideas start to flow.

I started with the embellisher - not wildly original, but it got me going. Making the (not very accurate) colour studies led me to explore some of the wonderful colours in the photo. (I don't think the detritus on the ground really was purple, but that's what made me pick that particular photo.)

However, the more I looked at those twisted branches, the more I though about knitting. And in monochrome, although I do keep thinking about working the negative spaces in purples and greens....

A combination of high tech (knitters graph paper on line and a scanner) and low tech (tracing my drawing onto acetate) produced a pattern, and I have, at the last count, ideas for six eight nine different versions.

Here are the first two. A lesson in how not to do intarsia (but it is only a sample, and I know where I went wrong). (If you want to see reaaly good intarsia, go here!)

And a version inspired (I kid you not) by old fashioned tea cosies. I've been using up scraps, but I've bought some wool from Texere and thoughts of dyeing and felting are going through my brain.

I also made a stencil, and that has had a good work out. Spray paint, acrylic, moulding paste plus metallic leaf, and pencil. 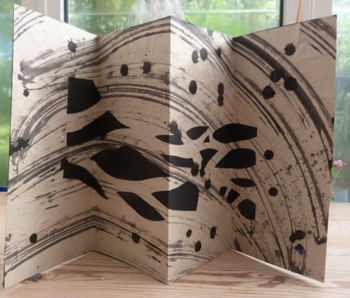 I was so busy with all this, that I nearly didn't make a book, but then I had an idea for a non-insomniac stencil based quickie. Except as usual with me it morphed and became less quick. The original idea was to use the stencil to cut shapes out of the back of a (brown) envelope. There's a lot of brown around at the moment, as well as purple and green. But the envelope wasn't big enough, and a search for other brown paper led to some Blue Peter painted paper.*

When I cut out the shapes, I decided the paper was a bit too flimsy, and it needed backing. With black. Which led to a search for black paper that was big enough. Still, it's finished, and it may even take up residence in the sketchbook. 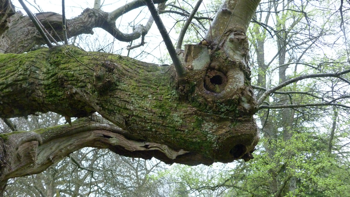 On Wednesday, I dragged Wensleydale out in the rain to Mottisfont because I knew they had some interesting trees. And we found a dragon - well, it  was St George's Day!

Where is this leading? I have no idea, but it promises to be an interesting journey.

*Here's some I made earlier.

you actually sound more motivated as well! Go for it.
Love the dragon!
Sandy
PS the proving robot thingy has gone back to letters. Huge sigh of relief as I don't do numbers very well!