It has been a busy week. It was Eastleigh College exhibition last weekend - probably the last one I shall be involved in. What with putting up the exhibition, stewarding, and taking it down, I was in college three times in five days. It was nice to meet some friends, indulge in a little retail therapy, and admire other people's contributions, though.

The rest of the week has been beginnings and endings: to begin with the endings. 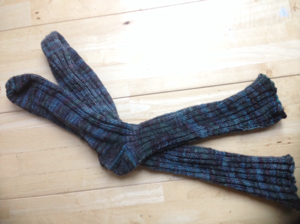 1. A pair of boot socks. Not elegant, but they make my inelegant wellies more comfortable, which is a Good Thing, and if you know why I capitalised that, you have probably read this. 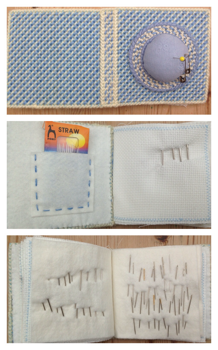 2. The book of the week - perhaps a bit of a cheat because it's a needle book. It's big enough to take all my sewing needles, and fits into a pocket of the new basket, so I'm pleased with it. Plus it used up more stash, which is a Good Thing. 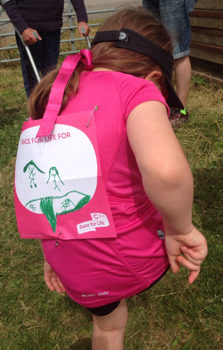 3. The Race for Life. Not finished by me, but by Babybel and her mum, in a time of 32 minutes, which isn't bad for a 6 year old. At least this year B. wasn't running with a broken arm, and she raised quite a lot of money for a good cause. Also a Good Thing. 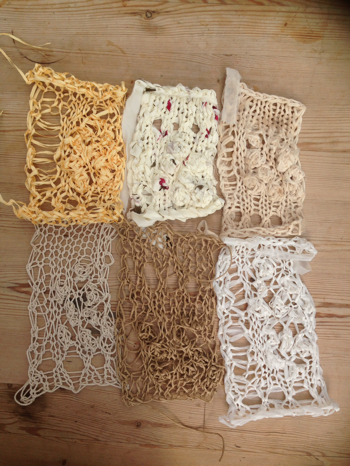 To end with the beginnings. 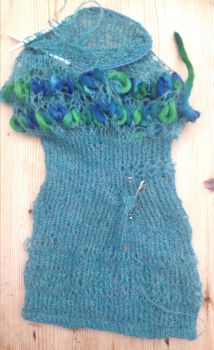 2. More sampling is in progress. I'm using stash to try out knitting a loooong cylinder, with every variation in the fabric I can think of. (The safety pins are so I can add a lump, bump or branch at a later date.) A Bizarre Thing? 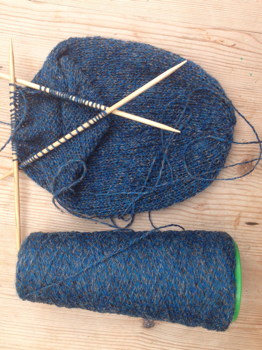 3. This, which looks like an oversized sock knitted toe up, is destined to be felted. You may notice that there are only three needles in the photo.  It is on hold because I broke the fourth one, and despite owning enough needles to start a shop, I don't appear to have another set of 4mm double points. A Bad Thing. 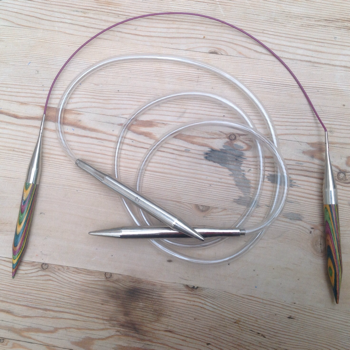 4. So I have spent the afternoon watching the TDF while sorting my needle collection (only the circulars to go) in order to justify putting in an order for some double point versions of the pretty one in this photo. I justified the purchase of the pretty circular because you need humungous needles to knit scribble lace (the multicoloured bit in the bizarre sample) and trying to knit in the round with only 60 stitches on the only 12mm circular I owned was like wrestling with a recalcitrant snake. The pretty Knitpros are interchangeable, so I can add a short cable to big needles. A Good Thing.

And then I ordered some more because they are pretty, the points feel like silk, and interchangeable needles are so flexible! (OK, I already have a set of interchangeables, but the joints catch on the yarn and come undone when you don't want them to. And they are not humungous enough.)

After the sorting, I have a large bag of redundant single point needles looking for a home. (Nobody needs 8 pairs of 7mm single points - especially when she rarely knits flat. This is what happens when you inherit three knitters' stashes.) (I don't think I can justify buying some Knitpro single points, though.) This is a Good Thing in terms of stash reduction, especially if I can find a good home for them. 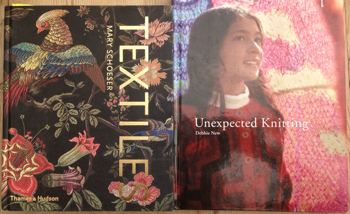 5. And finally, I have begun a little light heavy reading. Two books I fancied when they were first published, but couldn't justify buying - but now, well they are almost textbooks, aren't they? And I did get them second hand. And as, together they way nearly 5 kilos, I get a workout as well when I read them! Definitely a Good Thing.