The Tale of a Book

I sat down at big Mac to print off a couple of transparencies to make another acetate book, but got distracted into printing other stuff. That led to looking at Facebook, reading my emails, wandering off to do an ICAD, playing around with some watercolour - you get the picture.

Then I remembered the book. I spent some time wrestling with iPhoto, trying to get the photo to print the size I wanted, tried Word, and then decided that what I wanted to do wouldn't work. So I printed them the size iPhoto wanted them to be. On the wrong side of the acetates.

I washed off the acetates, and put them to dry. I have no idea whether I can reuse them, but it's worth a try. I got out two more, printed the photos again. On the wrong side of the acetate. 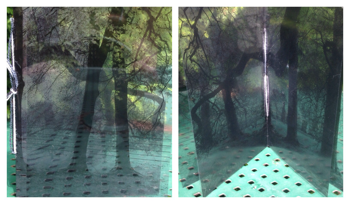 I washed off the acetates, and put them to dry. I have no idea whether I can reuse them, but it's worth a try. I got out two - er, only one left. So I printed the two photos, half size, on the one remaining acetate, and managed to get it right this time. Good job I only wanted to make a simple pamphlet book. The good news is that I have found a better way to fold acetates (score them with my patent scorer - a tapestry needle which accidentallky got stuck in a biggish bead, which makes it easier to grip). The bad news is that I scored one of them 1/4" away from the centre. The good news is that I like the way it looks anyway. The bad news is that the photos aren't very good. 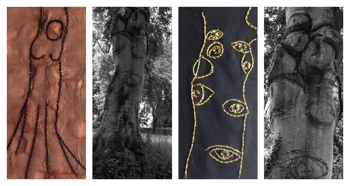 Embroiderer does embroidery! Still on my trees theme, inspired by bark, although it may not look like it at first glance.

Embroiderer also knits sock. One down, one to go. 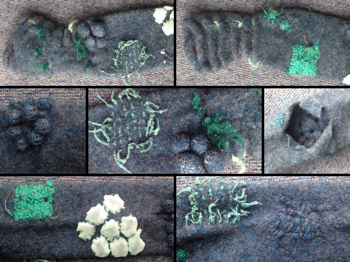 Embroiderer also felts TOPOKIED, makes it look even odder. After felting, I cut a hole in it as well, and added a bit of stitch. Bits of it definitely look like bark - or they would do if trees were turquoise.

you make me laugh! Glad I am not the only one who forgets the main aim when I get on this thing.
Sandy