So busy that although I know whose company we were in, I just had to check with Wensleydale what we did this week rather than last. We had a VIB (very important birthday) on Sunday, when the birthday boy received a variety of trains, construction vehicles and tractors. Bit of a theme there, you might think. 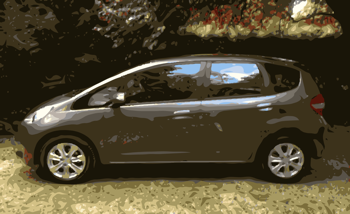 Since then we have been to Basingstoke several times - more times in one week, I think, as I have been in the rest of my life. One was the result of a request to go to Milestones (more vehicles), two were in connection with a VEP (very expensive purchase) (another vehicle). We've managed with one car for all of this century, but the ageing of Honda number three (he had two predecessors) plus the demands of going down to Chichester three times a week, led to the purchase of Honda number 4. We are now feeling rather poorer, but at least we keep Honda in business. (Except that Honda 3 is 11 years old and we would have kept Honda 1 more than 7 years if he hadn't lost an argument with a truck. Fortunately he was the only one that got hurt.) (Honda 3 was sold when we decided we could manage with one car.) 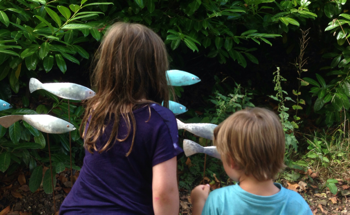 We also went to Mottisfont, where we didn't see much of the children's illustrators exhibition, we were too busy climbing about in the new play area (big wooden things) and in the water play area.  (Get wet! Dam a stream! Get wet! Pump up water! Did I mention getting wet?) Strongly recommended to adventurous children of all ages, but do what we didn't (because we didn't know it was there) and take a towel and a change of clothes.

They loved the fish, too, both the real ones and these. 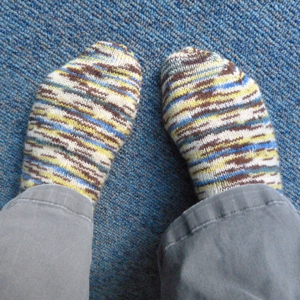 There has been some needlework. Socks have been finished and, for a change, and possibly a gift if it works out, a shawl has been started. Many, many times - I lost count after 8. It is not that it is a particularly difficult cast on, but last night I was tired, due to the stresses of driving back from Basingstoke in an unfamiliar car on the Friday before a bank holiday. Fortunately we know how to avoid the worst bit of the M3!

I had a few more goes this morning and eventually got it right, after I'd worked out that I needed to abandon my preconceptions that for a shawl you increase on every other row at two, or at most four, points. In this pattern there are 6 increase points but you don't increase at all of them every time. I think I've got my brain round it now. 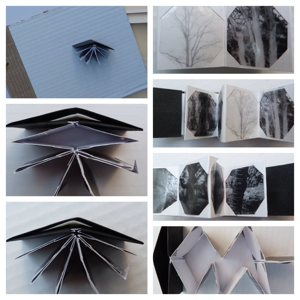 And I have made a book. Instructions here.

It's a very small one, which is not quite perfect, due to some slips of the craft knife. The photos are 1" square. I'm pondering trying a slightly bigger version, but I have a feeling size isn't everything. 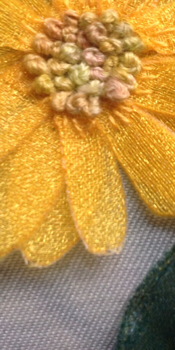 And finally - the second Visual Marks/Manor Farm piece is nearly finished - just some leaves to add, plus framing it - always the worst bit!