We've been away for a few days in deepest Dorset. OK, it's not very far away, but it was nice to go to a good hotel, be cosseted and eat far too much for a couple of days. 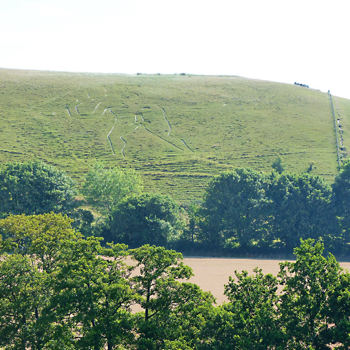 We went to see a giant. Although as W. said, he wasn't very prominent. I think he needs his chalk cleaning. However Cerne Abbas village was beautiful, with one of the prettiest paths to and from a car park I've ever trodden, a nice cafe and a lovely garden behind the church.

We also visited Sherborne Abbey, which is beautiful, with a stunning altar cloth, fan vaulted to match the ceiling. I forgot to ask the friendly lady in charge of leaflets who made it (the cloth, not the ceiling) though I bet it was the Sarum Group - does anyone know? We also took in Sherborne Castle (no particularly striking textiles) and Montacute, home of the Goodhart Samplers. I much prefer earlier, non-cross-stitch samplers to later Victorian ones, so I was delighted to see a few of this wonderful collection on show, together with a couple of modern ones. 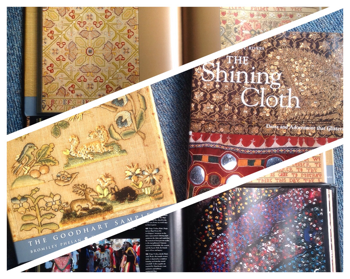 And that led to a book purchase or two. I jibbed at £40 for a paperback copy at Montacute itself, even if it was for a good cause, but managed to find a secondhand hardback copy on line for half that. The other book was mentioned on a blog (I can't remember whose, sorry if it was yours) and was also second hand. I've got quite a pile of heavyweight reading building up on the coffee table. 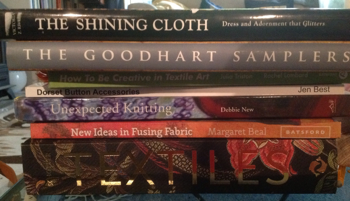 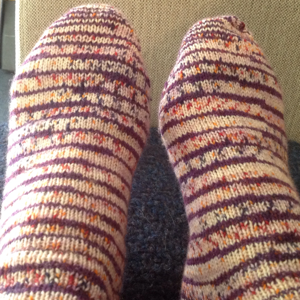 Despite my best intentions, I didn't manage to get much needlework done while we were away. Too much eating in the evenings. I managed a few rows on the sock, but nothing else. However I finished them today - lots of knitting TV (very exciting cycling which the best men and women won), plus cold feet, hurried up their completion. 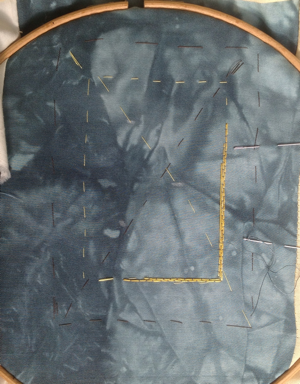 Since we got back I've made a start on my embroidery for the Manor Farm exhibition. Some design work and preparation, and four and a half couched lines.

This week's book would have continued the acetate theme, if I'd had any acetates. However Alisa Golden posted the instructions for this, so I made that instead. For once I followed the instructions almost exactly, just making the pages slightly smaller so I could cut them out of one sheet of A3.

I was looking forward to a quiet week next week, but it is already shaping up to be busy. We have a week off from grandparenting and Wensleydale has an itinerary all planned...