In my extensive stash I have several rolls of something, bought from a floristry supplier who used to come to college. (She had lots of interesting things: I think she sold more to the embroiderers than she did to the florists.)

When I bought it, I may have had some idea of what I was going to do with it, but I suspect I just liked the pretty colours. I used some when I was being repetitious last summer, and found out that you can iron it and cut it with a soldering iron: it is non-woven and holey, and from its texture, I suspect it of being lightweight Lutradur.

In an attempt to use it up, I decided to try printing on it. Dangerous! What if it melts? I didn't mention this possibility to Wensleydale, lest he suspect me of deliberately sabotaging the $^<%#>€}<\> HP all-in-one which I hate, in order to justify buying something else. (Would I do something like that? Of course not. Well, not so soon after buying a new car...)

I remembered I had bought Marion Barnett and Dijanne Cervaal's publication on Lutradur, and went and found it, more easily than I expected. From this I learned that:

1. In order not to choke the printer it is a good idea to back the finer stuff with freezer paper,

2. As the ink tends to come off, it is a good idea to use a pre-coat. (Fortunately I had come across the remains of a bottle of clear Inkaid the other day, while looking for something else. I also found some PrintAbility, so I thought I'd try a comparison and use up some more stash.) 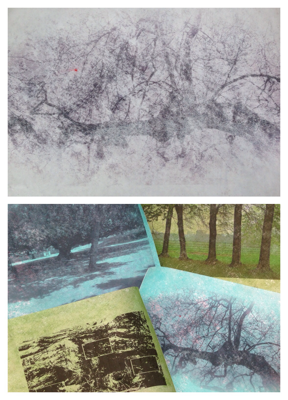 To cut a rambling story short:

4. Which was better, Inkaid or PrintAbility? Who knows: I forgot to make a note of which was which.

5. Will I do it again? Yes, but not with the Lutradurish material, as I would prefer white to the the pretty colours I have. So I have ordered some of the real stuff from Spunart. I'm thinking tranparencies over Lutradur. Whoops, stash extension.

6. Have I managed to use up significant amounts of the Lutradurish material, Inkaid, PrintAbility, or freezer paper? No, nothing but printer ink.

What did I learn?

2. The freezer paper looks great, but unfortunately it tends to smear, even when sprayed with fixative.

3. There are differences between the two pre-coats: one lets less ink through, sticks the Lutradurish material more firmly to the freezer paper, and makes the print stiffer but shinier (more on the back than the front). More experiments needed, with careful note taking. 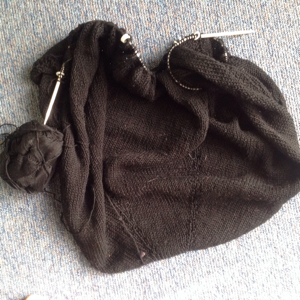 1. There has been some knitting - the boring but good for subtitle-reading body of the shawl before I get to the exciting but needing concentration lace border. 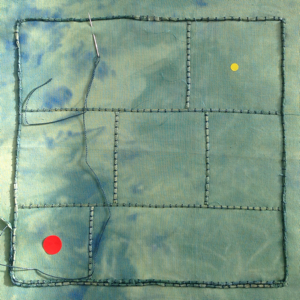 2. There has been some embroidery - the framework of my latest Visual Marks/Manor Farm piece. (The dots are where the first flowers will go.) 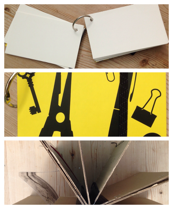 3. A couple of books. I added transparencies to the recycled card book I made a while ago, and made a quick index card book for the latest Daisy Yellow challenge. They should have been ATC’s, but I found these small index cards in a drawer, so decided to use them inste 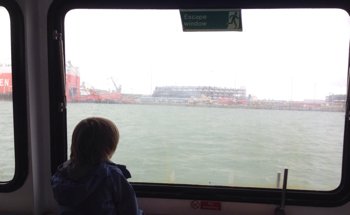 4. We have had exciting outings, to Manor Farm again, by special request, and to the  Hythe Ferry, which we have only just discovered. If you wish to entertain a transport mad small person, it cannot be beat. Narrow gauge train ride? Yes, times two. Boat trip? Yes, times two. Huge ships to look at, which are loading and unloading cars, tractors and diggers? Yes, times two. An icecream while you watch the Isle of Wight catamaran sail in and out? Yes, but only one, unfortunately. Wensleydale suggested that next time - and I'm sure there will be a next time - we can make it nearly perfect by getting the bus between the ferry terminal and Southampton. Times two.

Next week should be marginally quieter as the little guys go back to school, but I have an invitation to the Mature Students' Welcome Event at Uni. It's beginning to get scary...

Love no. 4 :-)). If you use masking tape you can tape the lutrador to regular printing paper. No smearing and a usable piece of paper.

Do you mean Deco Web? I have found it difficult to colour at home but have used it bonded to fabric as a base to work on. Because it is so holey anything you place on top will bond as well.

Sounds like Deco Web - very difficult to colour at home but available in lots of colours. I have used it as a base layer bonded to velvet - due to the holes there's enough adhesive left in the bondaweb to take a second layer ironed straight on top.