a quote which will be completely lost on non-Brits and/or those under 50 ...
The purchase of my lap top led to a rethink of our broadband supplier - as we only had provision for one machine and not even Cheese Major could find a way to get round of it [short of paying for it, you understand.]
Both junior Cheeses recommended the same supplier as an alternative [naming no names but they advertise a lot on the telly].
So on Sunday night we ordered the hub - and a few extras - on line. We were asked to specify a delivery date - so we did. Next Tuesday, as it was the first date we could be sure we would be in to sign for the package.
A machine e-mailed us back, acknowledged the order and told us we'd get another e-mail confirming the order within 2 working days.
We didn't.
On Wednesday, while we were out, a courier firm put a card through the door saying they had tried to deliver a parcel for Wensleydale but the 'premises were closed'. We have had dealings with this particular firm before, and won't knowingly do business with anyone who uses them, because usually they will only try to deliver once, and then we have a 40 mile round rip to the depot. However on this occasion they say they'd be back.
Still no e-mail.
On Thursday we had a letter from the broad band supplier to say that the stuff would be delivered next Monday.
Minor panic because we have things to do on Monday but we decided by cancelling our lunch date we could be sure there wold be someone in.
Late that afternoon the courier returned with - you've guessed it - the stuff from the broad band supplier.
I wouldn't normally complain about things being delivered early - but if we had still been working, we would have had to take time off to be in for the delivery and still ended up going to the depot to collect it.
And their adverts irritate me as well.
This comes on top of the three months it took to get our gas fire repaired - and a sneaking suspicion that our gas supplier [again no names but the engineer, a man of mature years, kept calling it 'The Board'] weren't really interested in repairing stuff - they would have preferred us to write it off and buy a new one. Fortunately their engineer felt differently.
So I am a bit p****d off with major British utilities suppliers.
To turn to more pleasant topics - for once these aren't spring flowers but from a bouquet Wensleydale bought a while ago - a subtle wash of colour and beautifully shaped petals. 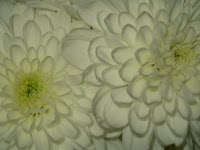 Lovely flowers, such a subtle colour. Have had similar problems with that Broadband supplier also and have now gone with one who only charges half that they did and does what they say they are going to do - also UK only call centre!