We live such exciting lives ...

we have had both a Tuesday trip and a Wednesday wander this week.

Last night we went to the Watermill Theatre again, with Mr and Mrs Cheddar, to see 'The Merchant of Venice'. I 'did' the MoV at school and a few decades have elapsed since then, so although I remembered the gist of the plot, the finer points had vanished from my memory. And some of the points made in this production were not those emphasised at a girls grammar school in the 60s ...

It is a very dramatic, gorious [no, that isn't a typo] production with some excellent performances, and as always with this company, excellent music and a set that made brilliant use of a very small space. Well worth seeing.

As we had to be in Winchester this morning we took the opportunity to visit a ceramics exhibition by Ashley Howard in the Cathedral.

It was described as an exhibition of ceramic 'fonts', inspired by architectural features including medieval tiles. So of course I had to go!

I was expecting something tall, highly glazed and quite elaborate. 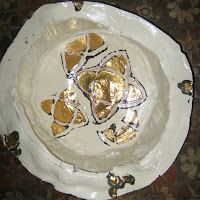 You may recognise some of these patterns! 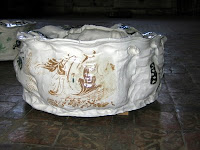 There are about a dozen of these pieces, roughly a metre across, sitting on the tiles which inspired them. As the catalogue points out, we don't expect to find ceramics on the floor!

Howard discusses the interplay of oriental influences on his work and the Western architectural tradition, and that certainly came over to us in his work. Some, like the one above, had marks that could almost be oriental script - others, like that below, looked almost as if they could have been unearthed by archaeologists. 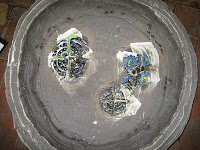 I liked Howard's quote from EH Gombrich: 'Usually we walk through life without paying much attention to the infinite variety of patterns and decorative motifs which we encounter all around us ...'. Howard continues 'For me, the form is fundamental, and the embellishment of form and surface is an exciting and intriguing area of contemporary craft practice.' Couldn't agree more!
My yellow today picture is something much more transient and fragile - a primula, as close up as the camera would let me get. 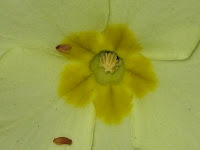 Why are so many spring flowers yellow? Are spring flowers in other geographical areas also often yellow? Does any one know?
Posted by Cda00uk at 17:19

Hi,
I have noticed that in England, Spring develops over several weeks - months even, rather than a couple weeks like where I grew up. So, I have come to realise there is a bit of a system...sometimes overlaping, and sometimes early like in gardens with small pockets of sun - microclimates.

But here is how it seems to work. White flowers first... like snowdrops, white crocuses. (you can get purple crocuses in here, too.)
Yellow flowers next, forsythia, more crocuses, daffs
pink/blue/purple flowers next, sometimes coming in bloom together, sometimes a bit seperate cherry blossom, grape hyacynths, bluebells, hyacynths etc.

and then the rest start coming too fast to consider, but they include the bolder brighter colours like tulips.

At least that is what I have noticed.
Sandy in Bracknell