A thank you, some experiments, and a flower

First - a thank you to Lisette, for nominating me for an award.

I am always proud to be nominated but like Lisette I have found not everyone likes it - so instead of passing the award on, I'll take it as an opportunity to point you towards some blogs I enjoy - and which I would have nominated if I did - if you see what I mean ...

The first is Lisette's own blog - textiles, food and cats! What more could you ask? And look at her list of influences. Clearly a woman after my own heart!

Of course. if you prefer just food, you could try her other blog. Eat your way up the High Street? I'd be waddling even more than usual by the time I got to the end - although here it would be eat your way from the station to Barclays, the High St restaurants being less - er - let's say - less individualistic. ...

Another blog I enjoy, although it's not a textile one, is Martha Marshall's 'An Artist's Journal'. Just look what she did with some of her luscious papers and Photoshop. Pity I've got Paint Shop Pro ...

Finally - if you like artist's books this blog will save you the bother of making your own. They have a generous give away of books which you can print out, as well as all sorts of other interesting stuff.


And now for something completely different. This is finished. 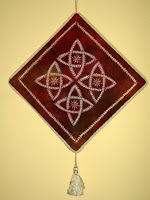 That rather undisciplined tassel was even more ill disciplined until I steamed it - the result of using rayon thread that had been wound on its card for at least 15 years [i.e. since I inherited it from my aunt] and probably even longer [i.e. since she frugally recycled it from somewhere else since one lot was all yard long pieces knotted together]. [It's being half Yorkshire, I think.]
We looked at the original tiles again while we were in the Cathedral yesterday and it was interesting that the circle, which comes out clearly in the embroidery [to me, anyway!] is much less obvious when you see the tiles en masse.
The experimental pieces are dyed, washed, and pressed - and in one case, zapped with a heat gun as well.

These are in the same order as the last time I showed them to you - wadding, flannel and felt backing. They all shrank a bit more with a second washing, and the felt is now pretty well square again - albeit 1.5 inches smaller all round = which my trusty calculator makes a 12% shrinkage rate.

This is the pieces from the back, in the same order. I was surprised how well the felt took the dye, until I remembered that it is wool/viscose, and viscose takes Procion dye, being a cellulose fibre.
The white stripe across them is a strip of poly organza set into the seam - and this is one after zapping. 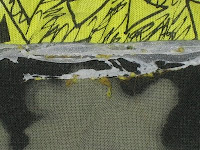 Below is what I thought was black poly organza with a scoobydoo as a piping. However the black was very reluctant to melt, suggesting it wasn't a man-made fibre. The cotton was beginning to singe before the sheer reluctantly went into tiny holes and then went shiny and hard. 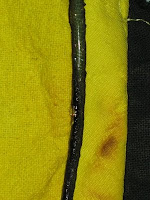 Not sure why Blogger has put it vertical when the original is horizontal - but I can live with it.

The next one was a layer of sparkle organza over cotton. As you can see the dye went through the organza and dyed the under layer successfully - which is what I hoped. 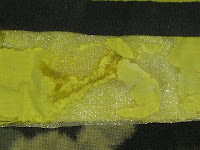 And finally - yet more yellow - Christmas Roses at the Hillier Gardens. I love this pale yellowy green, it is such a bizarre colour for a flower! This was taken last January - notice the misguided bee. 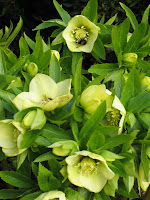 I apologise for such a long post - not sure how I had the energy after wrestling with my embroidery unit which did not want to behave since the chief techie wasn't here - and dealing with the aftermath of Wensleydale's attempt to flood the house. All OK now but the kitchen floor is much cleaner than it was ... I told you we lived exciting lives.
Posted by Cda00uk at 13:26

Hi! I just wanted to thank you for the link to "FREE FOR ALL", and compliment you on the engaging mix of art and life that you give us on your blog!!

Celia, thank you for the link to my blog. I'm glad you enjoyed the digital images!

Your blog is just full of inspiration. I love your adventurous spirit.

My one and only sister's name is Celia.

Have a great weekend -