What a difference a day made. 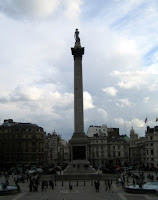 This morning in Hampshire. I think I will have to wait a bit longer for my cherry blossom. 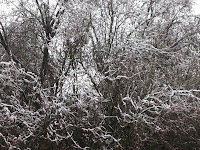 Those of you who know London may recognise that the first photo was taken from the steps of the National Gallery, where we had gone to see this. Although the reviews seem to be lukewarm, I thought it was excellent - this gives you a flavour. It is, apparently, a smaller version of an exhibition in Paris over the winter, but it was quite big enough for me!
I don't think I have ever seen a Picasso in the flesh before, although of course I have seen lots of reproductions, including this and this, both of which are in the exhibition. Most of the other works were new to me, which indicates my ignorance - but I feel I know a lot more about Picasso now. What struck me repeatedly was his use of colour and line, especially in this, which I think is wonderful - the reproduction doesn't do it justice! Notice how he sometimes colours in the lines, and sometimes doesn't?
We had gone to London on a college trip to the Mall Galleries to see the Prism exhibition - which I found less exciting than the Picasso - perhaps we shouldn't have been to the National Gallery first? Some pieces just didn't speak to me at all - I felt they were amateurish, or naff, or both. I felt all of the work my fellow students produced for our end of C&G show was better than some of the work I saw yesterday.
On the other hand there was some excellent work. I single out Ruth Issett because her name is the only one I can remember, but there were other equally interesting pieces.
If you went to the show - what do you think? Am I missing the point?
And finally - today's turquoise picture. After the romance of India - this one was taken in Birmingham. The NEC in twilight. 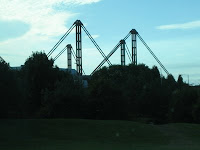 But aren't those interesting shapes?