Our night with the great and the good.

I promised to tell you about our evening out last night - hoping at the time it would be worth reporting back on. I am pleased to say that it was.
If you have been reading my blog for a while you may remember that Wensleydale and I spent a very enjoyable afternoon with Hampshire Museums Service.
During that afternoon members of the public were asked to nominate objects to go on exhibition - and last night was the 'opening reception' for the exhibition.
Not having spent much time at such events, I wasn't sure what to expect. After a glass of white wine with a distinct touch of vinegar, we had the speeches, from a council apparatchik, a councillor, and a Poet Laureate. [See what I mean about the great and the good?]
The speeches consisted of an exhortation to be enthused by our museums and libraries delivered in a voice with no enthusiasm in it at all, a reading of a press release - and a spontaneous and witty speech which really made us want to get in to see the exhibition. I won't say who made which speech - but Andrew Motion is a very good speaker ...
Motion described the exhibition as a 'cabinet of curiosities' and it was very apt. It is, to use one of my favourite words, 'eclectic'. Some real treasures like the Tichborne spoons - and a 1990s Motorola phone. An Epstein bronze - and a Kenwood Chef. Some highlights here. Unfortunately the Keble car and the pelisse [possibly] owned by Jane Austen were only there for the opening night.
I was pleased that so many of my favourites were included - the pram and the 'revolver' that is really a sewing kit, for example. With quotes from yours truly. [Fame at last!]
There are some wonderful textiles, including a display of flapper dresses and shoes, older clothing and two tapestries. We will be going again for another look when it is quieter.
I have also found time for some embroidery. 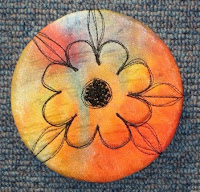 Now you may be thinking that only a day or two ago I was wittering on about salt pans, quilts and shrinking felt. And now I've gone back to tiles. But it is not unconnected.
The salt pan work made me think about line - how best to produce the lines in the designs. Although they could be hand embroidered I felt free motion embroidery/quilting was a better choice. But, as I mentioned before, I find it a bit scary. I also wanted quite emphatic lines - which suggested using a heavier thread in the bobbin and working from the back.
So - a bit of experimentation and practice was called for. I have had these bits of fabric tacked together since the last Contemporary Textiles Workshop - there are two layers of transfer printed fabric, a sheer and a satin, and some wadding -but I had no idea what to do with them.
My doodle for Doodle Day suggested the daisy stamp, so I stamped it on the back and FME'd round it.
I will spare you the details of the unpicking, changing the wadding, restamping, lacing over a CD, realising it needed some hand stitch and relacing.
But I like it. And fortuitously it goes perfectly with he rest of my CD wallhanging.
I wasn't sure what to post as the final orange picture - this, or an image of some crocisma at the Hillier Gardens. The flowers are technically a better picture but I decided they were a bit obvious - and next week's yellow week looks as if it is going to be very flowery. 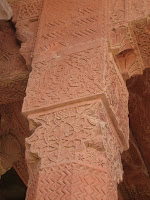 This is a pillar in Fatehpur Sikri in Rajasthan, built of sandstone and so a bit orangey. I chose it because of all the wonderful patterns - enough to start a new round of stamp making! [Not.]