I certainly haven’t got any.

I think it’s the result of a combination of things:

I did have a bit of a tidy up – it started when I decided to move the radio from the high window sill [the one which was in the larder when the room was a kitchen], where it was walled in by tool boxes and laundry baskets and I couldn't reach it – to the proper window sill, which is lower. What a dreadful sentence – but it stays.

Of course moving the radio involved moving stuff off the lower sill – you didn’t think it was empty, did you? And of course I couldn't just swap the contents of the two sills over. I decided to move the hand-made books from the window sill to the shelves – which meant finding a home for the things on the shelves - which were too big to go on the window sills – well, you get the picture.

There was an up si 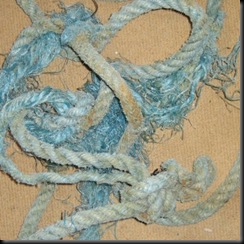 de to this because I found some raffia, which Mrs  Cheddar asked me about, and this.

I need some 1” diameter rope for a dyeing course at the end of the month – but I suspect this will not be suitable.

The other good thing about my lack of inspiration is that I have tackled some WIPs.

and this. For some reason it seems to be impossible to take a decent picture of either – although the close up of the salt pans is better. 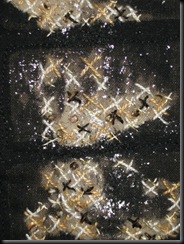 The little white dots aren’t dandruff, but foil. This is now officially finished – apart from working out how to hang it up – and where.

Since I took the photo, the discharged piece has had it’s hems tacked. My current plan is to work a whipped running stitch to hold the hems and then suspend the piece from a length of dowel. It may also acquires some tassels. It is the next Contemporary Textiles session a week today so I am trying to get it finished by then. 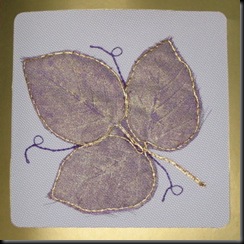 Today’s C&G sample is my version of Carrickmacross. You are forgiven for not recognising it as such.

All this batch of samples are vaguely appliqué related – there are pieces of sheers appliquéd to the net for the leaves.

One of the few things I’ve ever done that was purple. The only other thing I can think of is my  accessory for C&G which you will never see – some warts are too wartish to be revealed…

I love the long brown WIP, very very much.