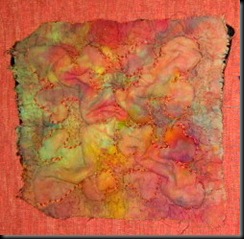 This is the Trapunto’d and quilted on to felt piece after it emerged from the washing machine. It is difficult to see in the photo – but it is now very puffy. The fleur-de-lises are about 1” deep – and I only used low loft batting to Trapunto them. So if the experiment was to find out of the process worked – yes it did. i haven’t measured how much the felt shrank, and I'm too lazy to get up and do it, but I'll try to remember to do it tomorrow.

The ‘background’ where there is just the layer of felt under the fabric, and which I seed stitched, has a lovely texture too – the whole thing is very tactile. 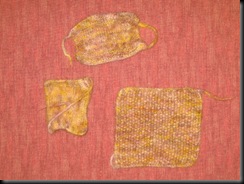 I also had these in the washing machine – 3 little bits of knitting [I haven’t completely abandoned  brown.]

This was an experiment in felting some  wool i hand dyed ages ago – and didn't like the colour. It felts beautifully though – very soft and with a faint fuzz to it. I’m thinking this could be used in the embellisher – definitely successful – apart from the colour …

I spent the afternoon working on a background with the embellisher, inspired by Sheila Smith’s ‘Embellish, Stitch, Felt.’ [I had to get up to check the title so I measured the multi-coloured lump – out with the calculator – about 25 % shrinkage. No wonder it went so puffy!]

Back to the embellisher. The piece looked best at Step 1 but I forgot to take a photo. it was one of those pieces where everything I did to it made it look worse … 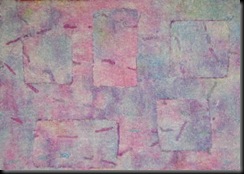 This is dyed scrim embellished on to felt, stitched and then pieces cut out and rearranged. 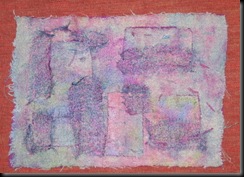 Step 3, In an attempt to cover up the holes left by my inexpert cutting I embellished some scraps of silk and metallic organza on, definitely not an improvement. 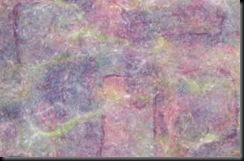 So – step 4 - I added some glitzy fibres  - which I think cover up some of the sins.

It was so nice before I started mucking about with it …

And here is the final brown image – and probably the final colour image as I've run out of colours. An image from the Watts Chapel near Guildford. No floor tiles [that i remember, I may be wrong] but lots and lots and lots of inspiration.