Not a lot happening here

or rather,  several things have been started and ended up in the bin.

So I’m glad I have the results of the weekend’s dyeing to show you. 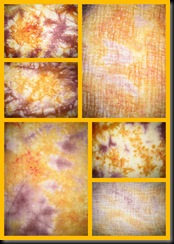 Just to remind you, these were done following the techniques in Benn and Morgan’s book ‘Tray Dyeing’. As you can see, these are not techniques to follow if you like evenly dyed pieces. Fortunately I don’t. I love this sort of texture, it’s why I hand dye. However  I think I may overdye these to get rid of the white.

The images are a bit misleading as the scrim and cheese cloth [all the smaller images except the lower one] don't have white patches. I put them on a white background to photograph them – otherwise you would have seen the blue checks on my ironing board through them.

The thicker fabrics – silk noil and cotton – do have white sections – they were packed pretty tightly in the tray. The dye colours are Kemtex Procion Red-Brown [which has come out a sort of maroon]  and Reactive Rust, which is yellow-orange with red speckles where i didn’t dissolve it properly. 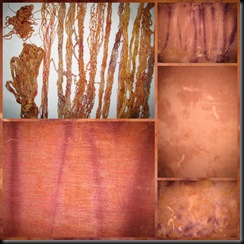 These are the threads I dyed in the same dye bath, and the predyed, discharged pieces which I overdyed. The rust doesn't really show up much, but I love the tiger stripes. Bottom left is the commercial fabric I bought in Skipton – I didn’t know it it would dye but as you can see, it has. 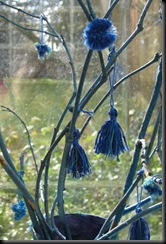 This is the final tassel instalment- a tassel tree. These are tiny tassels on spray painted twigs, in a papier-mache pot which was also part of a C&G exercise. They are still around 4 years later despite Quality Control, who frequently sends them flying.