was to Alton. We had an exciting journey – as we often seem to do on the A31. A cyclist who didn’t believe in traffic lights [why do they do that? – they have less chance of winning than a car!] a motorist who didn’t believe in stopping at roundabouts, and a falling tree branch which hit the windscreen. Fortunately no person or machine suffered any physical damage – although none of it did my nerves any good.

We were headed for the Allen Gallery in Alton to see this. ‘Landscape and Trash’! Who could resist?

It is quite a small exhibition, and the work of the two artists is very different. Debbie Stanistreet’s work is more restrained and traditional, Alyson Parker’s more extrovert and unusual. I jotted down some of the additions to her canvases – vegetable nets, shells, pebbles, washers, scrim. threads, scoobydoos, bits of knitting, foil, mesh ribbons - and paint, of course.

There are some textiles in the gallery as well. I knew Hampshire had commissioned this quilt – but had no idea where it was. Well – it is in the Allen Gallery, in their Tudors exhibition. No mention of the artist except on a postcard in the shop – but unmistakable. And you can get really close to admire the incredible skill with which it is made. I may have mentioned before that I prefer more abstract art - but there are some exceptions!

The Tudor exhibition at the Gallery also includes this replica of Mary Tudor’s wedding dress, made by Tanya Elliott,  which is amazing. The booklet which outlined her research and the stages of making the reproduction was fascinating.

After a cup of coffee we went upstairs in the Gallery, not knowing what we would find. The answer was lots and lots and lots of ceramics. The only place I’ve seen as many was the Bowes Museum. I was underwhelmed by those – but enjoyed the Allen Gallery collection, which is more varied and, I think, better explained.

Two special pleasures. First - they had a bowl by Peter Lane. And so do we. We bought it as a 25th anniversary present to ourselves in Stratford on Avon – and then discovered the potter came from Hampshire. It looks similar to this.

Secondly – they had tiles. Not medieval ones, but an enormous range of European and Turkish ones. I am definitely going back with a sketchbook! 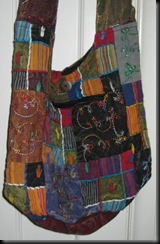 After all that excitement we wandered down the High Street to get something to eat and found out it was market day.

So I bought a bag. Of course I have hundreds of bags I’ve made – well, dozens – but I couldn’t resist this one. Talk about ageing hippy …

We took our sandwiches over to the car park at Chawton, and parked under the trees because it was quite warm. And half way through the sandwich eating two branches dropped on the bonnet of the car.

Come on trees, I like you – stop throwing branches at me!

We moved to the treeless side of the car park.

Of course, if you visit Chawton it is a legal requirement to go here. As usual, I exaggerate – but we seem to visit at least once a year. There is some building work going on, but it didn’t spoil our enjoyment, and I was delighted to find a textiles exhibition in the house as well. An interesting explanation of the ideas behind the work, and some ver 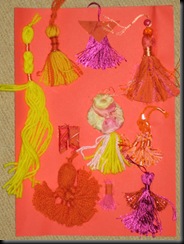 My textile example is much less refined – the penultimate example from my tassels collection. I was exploring multiple tassels, in addition to different heads, but there is also an example of my favourite type, [top right] made by ripping silk fabric and using that instead of thread for the skirt.

I have wittered on long enough so will leave the dyeing results till tomorrow.