Can’t get my mind off brown so, having bought some of the brown dyes recommended by C June Barnes I decided it was time to try them out – but on yardage rather than a quilt.

So Ii turned to Leslie Morgan and Claire Benn’s ‘Tray Dyeing’ which I bought a while ago, read, enjoyed – and promptly forgot about.

So – as I was going to dye – I started with undyeing. OK – discharging. I have metres of fabric which I dyed brown for some reason I cannot now remember. [Story of my life, really.] I decided to discharge and overdye some of it. This is it, plus a bit of one of the fents I bought in Skipton, ‘artfully scrunched’ [their words, not mine] and/or pleated, as instructed by Benn and Morgan. [I should make clear that they don’t give instructions for discharging, that was my idea.] 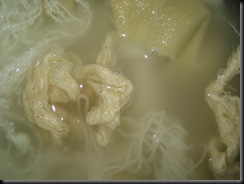 The  Benn and Morgan technique involves a pre-soak in soda ash – I got quite carried away photographing this stage.I like the way the flash reflects off the surface of the water. 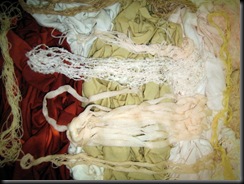 Here are the fabrics waiting for the dye. The threads look pinkish because they had picked up loose colour from the brown fabric, while soaking in the soda solution. 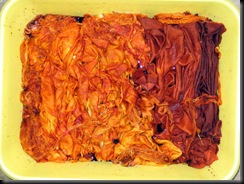 As I have run out of colours, I thought for the daily photo series I would show you a few 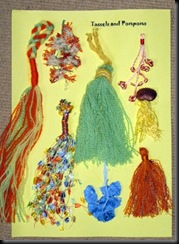 C&G bits – mostly samples because I think I’ve shown you most of the major pieces already. So, as I’d talked about my tassel collect ion, let’s start with those.

We made tassels during Part 1, when I was still putting most of my samples in page protectors,so some are a bit crushed. [A taught me better.]

Most of these are ordinary tassels but with various heads . The example second from left at the top is a bit different – it’s a technique the tutor showed us. You make a series of overhand knots in the yarn, cut them into pairs, and tie a bundle together to make a pompom. I used knitting ribbon stuffed with viscose threads for that one.