because I haven’t got much to report. Yesterday was college day. We started with an interesting lecture on gender and politics in art – except it was much more about gender politics. Interesting how many feminists came out of the closet …

Then we had a session on machine embroidery, about which the less said the better. So I’ll say something.

It was one of those sessions when I didn’t have the right thread, the right fabric, the right machine, the right inspiration, the right amount of sleep the night before, there was an ‘R’ in the month, the wind was in the wrong direction, and the gods of free machine embroidery were not on my side. You get the picture.

So today – after I had put back all the wrong stuff I had taken the day before, and got out the stuff I would have taken if I had known what it was we were going to do – I began to think about starting again.

You will have noticed I didn’t say I started again? That’s for tomorrow, gods of free machining  willing. 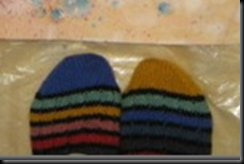 Just to improve my mood, I realised this morning that I had a very large hole in the heel of one of my favourite hand knit socks. The left one of these.

Quite beyond darning, even supposing I did such esoteric things.

good luck with the FME. I love doing it, but I have a Pfaff, which really makes a difference. Or at least I think so.

I happened to be waiting for a meeting with the head of our department at college when I learned the FME class might not run since the teacher is unable to take it. SO, being the enthusiast that I am (when I am not at home trying to work out how to fulfill all the obligations I have said Yes to)...I said I would do it!

Actually, I think I can use prep for a course that never ran, which I intended to show ways to develop manipulated textile surfaces, etc to do FME onto.

Watch this space.
Sandy in Bracknell

we all have days like that! not long until spring