We had some visitors today.

Not Babybel and her entourage, this time – but these two beauties. 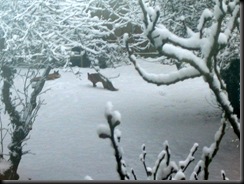 Sorry about the quality of the photo - it was hastily snatched before they went away. They were having an enjoyable time chasing each other, rolling in the snow, and even leaping over each other. I suspect from what I've Googled since that this was a courtship routine.

We had an extra inch of snow overnight, so I bottled out of going to college, even though it was open. As someone said, ‘Even if you’ve got 4WD, someone else can still slide into you’ – and I knew the side streets round college would not have been cleared. Of course I felt very guilty about it – I rarely let the boys get away with not going to school because of the weather, as they will tell you at length if you mention the words ‘Hurricane of 1987’ …

Unfortunately I haven’t achieved much during my prolonged holiday. I did manage another drawing from the ‘Historia Ecclesiastica’. [Original here.] I did this one in pen – so no rubbing out – and once again i couldn’t fit all of it in. Perhaps I need to find a bigger sketchbook? Or draw a bit smaller, although I find that harder than you might expect.

Mind you, I do wonder if the scribe also had problems fitting it all in – there is such a layering and overlapping of letters. All those little animal heads biting the letters remind me of the Muppets, for some reason. Do you think Jim Henson was influenced by 9th century manuscripts?

Great photo of the foxes! Your lettering is tremendous - I'm trying not to see muppets!

i do hope so! what a wonderful idea :)

E'leigh roads are pretty good (even yesterday) - remember we are a few metres closer to sea level down here and a bit warmer. Hope you can make college tomorrow!