probably because I could actually breathe. And I had a reasonable night’s sleep.

So I did some drawing. 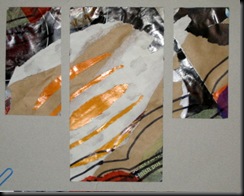 I started with the jar opener collage, and a triptych/kimono shaped mask. 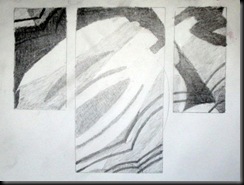 Then I drew it. All that shading was hard! 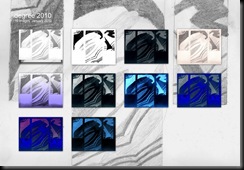 Then I scanned the drawing and played with it in Picasa. The only difficult bit was persuading Picasa to put the right date at the top. Not ‘April 2009’.

I think these are the most interesting ideas to have come out of that collage – appliqué? Canvas work? Lots of interesting linear stitches?

I suspect Wensleydale is hoping it might turn into a real kimono. He has such faith.

That was the morning – in the afternoon I tried a machine version of this.

The machine version is also on a colour catcher - the scan doesn’t really show that I went a bit mad with automatic blobs in gold thread. It will probably get a few beads this evening.

Back to the trees.  The top one is [I kid you not]washing up liquid drizzled on wet Brusho. It works the opposite way to salt, but as you can see it spread a bit too far. It also works best with the expensive organic colourless washing up liquid – unless you want a yellow tree.

The bottom one is bleach, applied with a brush to black paper, but as it didn’t discharge much I added some silver pen lines.