No, not mine – apart from the ‘Remember ‘ box [which Wensleydale insists on referring to as ‘the box of the dead’ – and that’s the improved version of his original name for it] – I haven’t done much. Nor would I necessarily describe it as ‘excellent’.

Today we had a Monday Meander, to see the work of two very different embroiderers. We started at Walford Mill, with an exhibition by Yvonne Morton. I am always attracted by work in muted colours – and her use of silk paper and black stitch, with occasional little touches of colour – is exquisite. Although her work is inspired by African fabric – and I can recognise that in it – some pieces also made me think of 18th and 19ht century estate maps - and I love maps. 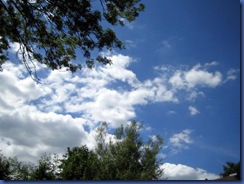 Then, after lunch at the Walford Mill cafe – outside so we could enjoy the view – we went on to the Dorchester Museum to see Alice Kettle’s exhibition ‘Allegory’. I saw it when it was at Farnham, but Wensleydale didn’t, and he was keen to go.  It was interesting to see it in a different environment – the larger pieces in particular, hung lower and in a different light so it was easier to get up close and really look at the way she works.

There was also a small exhibition of ‘proper’ bookbinding – a couple of dozen bindings of ‘The Mayor of Casterbridge’ and one of ‘Under the Greenwood Tree’. Interesting to see how real bookbinders work – and the different interpretations of the theme.

I am always amused in Dorchester by the blue plaque on Barclay's Bank, saying that the house is reputed to have been the residence of Michael Henchard, Hardy’s ‘Mayor of Casterbridge’. A blue plaque for a fictional character? Is there one on Elsinore Castle [OK, Kronborg] saying ‘Hamlet woz ‘ere’? [Never say I don’t check my sources.] 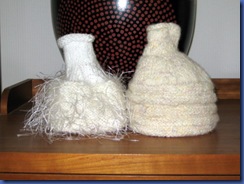 I may not have been sewing much – but I have been knitting – more bottles.

On these two I deliberately distorted the necks – with short rows in the felted one on the right, and uneven decreases in the yeti on the right. 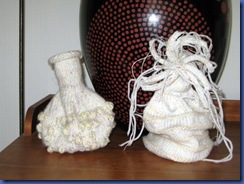 The distortion on these is, however, not deliberate. Neither are keen on standing upright – the bobbly one would probably have been better worked on smaller needles, and the sea anemone suffered from over vigorous washing. I was trying to felt the stripes, but only succeeded in making the non-feltable bits go floppy.

Wensleydale made the mistake of saying he liked these strange objects – he pets the yeti when he goes past it – so watch out for more. And if Giorgio Morandi can spend half a lifetime painting pots, I can spend some time knitting them! [Thanks to teacher Mel for introducing me to Morandi.]

I love those bottles, especially the anemone.