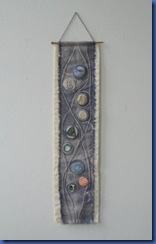 I felt it looked a bit lost in all that white space – and I was underwhelmed by it anyway – but its done and dusted and the next piece will be better  [I hope].

So after hammering in a nail to hang it – and then hammering it in again because it was too low – and having photos of some of my drawing studies drawings taken [not the 100 drawings] - and having a gossip with a former colleague who’s doing C&G and who I only see at College exhibitions - I got home in time to eat lunch with Wensleydale.

And then I cheered myself up by sitting in t 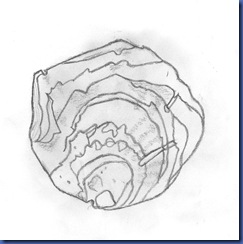 he sun and drawing – never thought I’d say that, especially as they were ‘proper’ drawings [and proper sunshine too, come to that – haven’t had much of that over the last few years].

An attempt to draw the shell properly – minimal detail as I’m not confident with shading etc., but I like the abstract pattern of it - 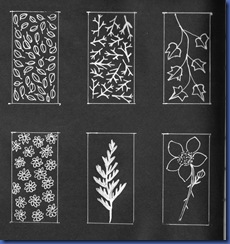 and ‘what I can see in the garden’ – very stylised. I had great fun with this and fancy doing another in black on white –  if I can think of another 6 things to draw…

I’m counting this as one drawing – so that’s up to number 20.

I think this sudden enthusiasm for drawing is because : 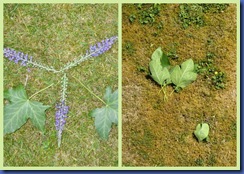 At the suggestion of someone at college, I re-photographed yesterday’s land art – one bit of which had survived better than the other. Interesting to see what’s there tomorrow.

I may use a series of photos rather than the first one for the homework, which raises a problem. I liked the fig leaf piece best, but it looks like there might not be much there tomorrow – which will make it a short series.

Wow! what a lot you've got done - all so interesting, loved the formal leaf arrangement in particular. Note that "gym" keeps featuring in your lists - this is one area where I need serious motivation!