We thought we were going to miss out… 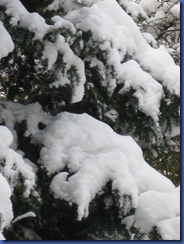 but when we woke up on Wednesday morning we realised that the rest of the country had very generously shared some of their snow with us. Not as much as some people have had, perhaps, but more than enough.

I was going to quote that poem about the snow coming on little cat feet – but just to check I Googled it and the poem, by Carl Sandburg, is actually about fog. Lovely little poem, though, and plenty of snow has come into the house on little cat feet – and belly and tail, since it is almost as deep as she is.

The humans, however, have stayed inside.

I began to take a few photographs [thanks to everyone who gave me much needed advice] – and I think one or two of them are probably useable.

But part way through, when I was whinging about camera shake, Wensleydale reminded me that Babybel’s daddy has a tripod, and then I remembered that he also has GCSE Photography  - so I whinged to him and he has offered me a loan of his tripod and a gift of his knowledge, and the photography is on hold till Monday, snow willing. 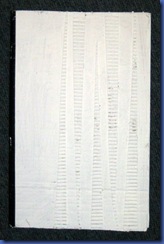 I have also made two books. One for the photographs when I’ve taken them and printed them [better order some more ink], and one as a workbook for the next module.

I’m bored with just spraying an Amazon mailer with paint for a cover – so I got a bit more creative with the one for the photographs. I stuck some bits of card on the mailer and daubed  it with emulsion paint. Trouble is that emulsion takes much longer to dry than spray paint, and current conditions in my painting studio [a.k.a. the conservatory – the unheated conservatory] – are not conducive to painstaking painting or rapid drying]. 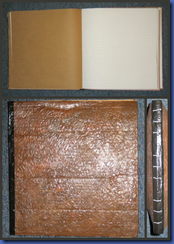 This is the workbook for the new module – and the cover is a sample.

I think I need something to keep the ‘everyday treasures’ in – like a leather covered box – except it won’t be leather. I’ve made fake leather before with brown paper, but I wondered about trying it with newspaper – and it worked. Sort of.

I didn’t want to reinforce the spine with tape – but I found the card tore when I stitched it [possibly because I was, for once, using linen thread]. I had to reinforce it and do it again, and by then I was fed up and tired. So that’s my excuse for wonky stitches. I was also thinking of stitching patterns on the covers themselves  - like saddle stitching – but decided that was probably not a good idea.

I haven’t ruled out using fake leather in the final piece, but I need to work out how to make it stronger – possibly by bondawebbing the paper to fabric before gluing it to card.