of a finished object. 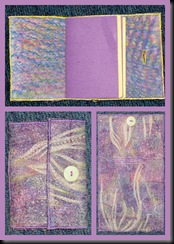 The felt book from ‘Re:bound’. The button hole would have been better a bit to the left and horizontal rather than vertical – but given the dearth of FOs around here recently – I’m pleased with it. It should fit neatly into my capacious bag for notes and sketches.

It wasn’t really in the spirit of ‘Re:bound’ because it’s not recycled, but it did use up a UFO or two – the embellished felt cover and the lining, which was an early experiment with fabric crayons I never thought I’d find a use for.

And as I think I’ve noted before, Finished Objects, like buses, tend to come in pairs. [I had a lot of time today because we got up early for Wensleydale to t 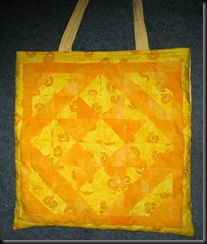 ake the car in for repair.]

This is the BQL August Challenge converted into a bag. I needed cheering up, hence the very un-me colours. And I used up some of the fabric from the cushion cover [hey, another FO!] so that was a bit more stash reduction.

[We won’t talk about the felt and Vilene I bought yesterday - because they are staples, not stash – or the silver net because that was only £1.50 a metre in the sale and you wouldn’t expect me to ignore a bargain like that, would you?]

Today’s image is, for a change – not the plank. More ‘son of plank’. It is the scan of the book back which I showed you yesterday, Picniked with the ‘Boost’ filter. Can you tell I like Picnik?

Worth the wait!
Lovely work.