Some more passion flowers – and a book.

I have mentioned the Hockneyizer before, so I 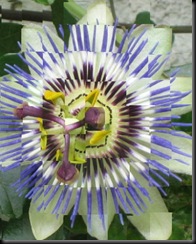 thought I would try it on my passion flower image.

This is the ‘joiner' version. I like this effect, although it is hard to know how to use it in textiles, apart perhaps from weaving one print of the original image through another. 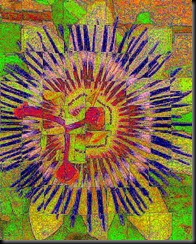 And because I can’t resist a bit of saturation, this is the image repeatedly saturated, warmified and sharpened in Picasa. I think this is a much more interesting image for textiles – FME, perhaps, or appliqué with hand-dyes. 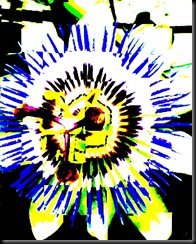 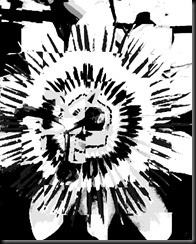 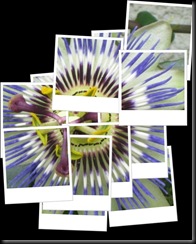 The Hockneyizer will  also make a Polaroid version, which I don’t like as much.  I don’t like the layout either, although I think you can shuffle it. 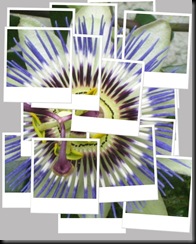 You can change the number of Polaroids but you still seem to lose the centre of the image to white space. 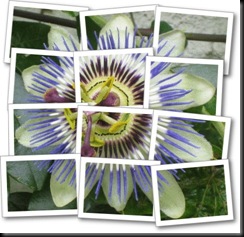 When I was surfing on Monday night I came across lunapic, which offers a similar effect which they call Photo Spread. I prefer this version – although the colour isn’t so good and you don’t get the characteristic Polaroid borders, you do get more of the centre of the image.

Not sure what I would do with it textile-wise, though!

Lunapic has a rather old fashioned look to it, and its ‘undo’ takes a bit of getting used to, but it has a lot of effects, to which I shall return – you have been warned!

For a change, I spent the afternoon book making. Coincidentally I had painted some sort-of-graffiti papers before 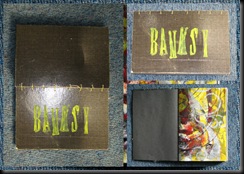 we went to the Banksy exhibition, so although I don’t think he does that sort of graffiti, I decided to use them to make a sketchbook for my Banksy study for college.

All I need to do now is to put something in it – apart from my photos and postcards, that is. I think I need to learn how to make stencils …

Thanks Celia! Maybe gel medium transfers are a good way of creating the polaroid effects.

WoW Celia! that's a lot of great information which I'll have to try. Babybelle is growing up so quickl, seems like no time at all since she was born. My 3rd grandbaby is due on Monday so we are all very excited.

Celia, Did you use Picasa for the black/white pic? I want to convert a photo to blackwhite but Photoshop ends up giving me a browny pic. Best wishes Lesley