Not quite what I’d intended it to be – the picture of men, bikes and sunflowers did not transfer as hoped – so I cut out some of my collagraphed leaves and made a pop-up. 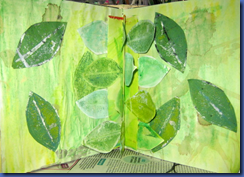 Unfortunately I haven’t managed to photograph it very well, but the central leaves are attached to a concertina, like a flag book.

Is it a drawing? Who cares!

I have also spent part of the afternoon wrestling with my printer in an attempt to get it to print on the fabrics I prepared earlier in the week. I have ironed them onto freezer paper, but it definitely does not want to print on any of them. It throws up it’s little pizza wheels in horror and sulks – in that ‘I’m never going to print anything again, but neither will I let you cancel the print job’ way that all my printers have had.

So when I get a moment [i.e. Friday at the earliest] I shall try the glue stick and ordinary paper technique and see if that works – I already know that it won’t do the masking tape on the leading edge method – not fooled by that trick at all.

Failing that it’s a new printer – which W has been suggesting for a while. Nice Epson with Durabrite inks I think …

Congratulations! Any chance of a private viewing?