Two out of three ain’t bad.

Experiments that is – and the third one may be OK if it ever dries out. 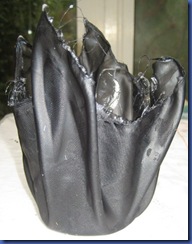 Against my expectations, the Paverpol one has dried. It isn’t as grey or shiny as it appears here, although there are shiny patches on the inside where, I think, the excessive stuff I painted on has pooled against the cling film. [The instructions do warn you not to use too much.]

I haven’t tried sewing it, but I think you probably could get a needle through, although I wonder if too much handling would soften it. But I'm impressed with anything which can make two layers of polyester organza stand up by themselves. [Thicker layers would probably not be sewable.] 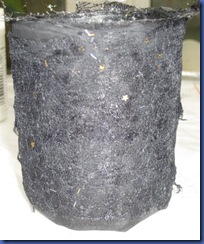 This is the PVA one, also dry. Again, it is blacker than it appears here, and, to my surprise, not shiny – though that may be because the top layer is lace. You definitely couldn’t sew into this one very easily - it is quite rigid and firm. 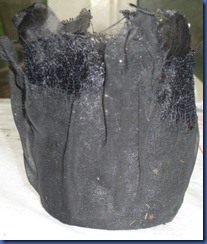 It’s the wallpaper paste which is taking its time to dry, although it was dry enough to take off the mould, to encourage the inside to dry. It is much softer than the other two and could be easily sewn into – although I think handling might make it even floppier.

I did make the paste a bit too runny [possibly one reason why it’s not dried yet] so thicker paste may have made it stiffer.

So – some good results. None of these is going to be a ‘resolved sample’ – but the experiment has given me a lot of ideas.

Not much embroidery today as we went out to cheer on Babybel’s mum in the Highclere Multi-Terrain 10k race – another personal best and, we think, the 11th woman home – well done Babybel’s mum! 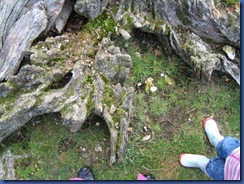